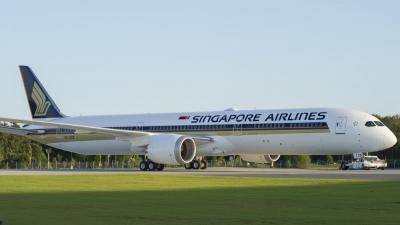 First announced at the 2013 Paris Air Show, the Boeing 787-10 is claimed to be the most efficient airliner in its class with the lowest operating costs per seat of any wide-bodied aircraft currently in service. It has 95 percent commonality with the 787-9 and is 25 percent more fuel efficient than the previous generation of aircraft. A stretched version of the 787-9, the 787-10 is 18 ft (5.5 m) longer, carries 330 passengers in a two-class cabin (40 more than the 787-9), and has 15 percent more cargo space.

"This is a big day for all of us at Boeing and for our global supplier partners," says Kevin McAllister, Boeing Commercial Airplanes president and chief executive officer. "We are thrilled to deliver the first 787-10 Dreamliner to Singapore Airlines, one of the world's leading carriers. And we are honored by Singapore's partnership and trust, as reflected by their repeated orders for the Dreamliner. The 787-10 will extend the Dreamliner effect that we are seeing across commercial aviation as the 787's superior passenger experience and unmatched fuel efficiency helps airlines open new routes and achieve significant fuel savings and emission reduction."

More in this category: « An airline's new seats let parents and babies lie down together during a flight Emirates celebrates Easter with special offering in flight and on the ground »
back to top
May 31, 2018