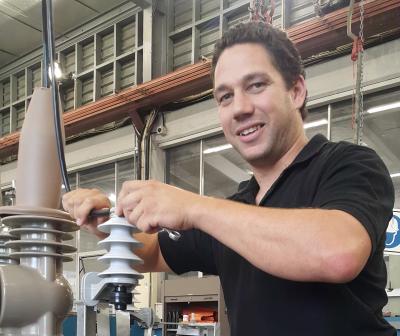 Matt Macaulay works as an electrical fitter at Unison.

Top Hawke’s Bay apprentice Matthew Macaulay is a bright spark in the trades.  From Hastings, Matt qualified as a horticulturist and then as a boilermaker before deciding to pursue an electrical engineering apprenticeship, studying at EIT.

An electrical fitter at Unison, the 32-year-old was presented with the Mike Davis Memorial Cup for the top overall apprentice at the recent EIT-Rotary Club of Greenmeadows Trade Training Awards.

Adding to that achievement, he also received the Master Electricians’ Award for the top Hawke’s Bay ITO apprentice for 2017 and the Unison Power Lines People’s Award for topping last year’s ITO electrical trade exams nationwide with a 95 percent pass.

“What set Matthew apart from other students in his class was his drive and determination to succeed.”

In 2013, Matt returned to New Zealand with wife Natasha and children James (now eight) and Zara (6). Having built gantry cranes and the like in Australia, he continued with building trucks and trailers in Hawke’s Bay.

“A pile of steel comes in,” he says, “and a truck goes out. It was seeing something through from start to finish.”

Two years after the move, which was about being close to family, his father-in-law, employed at Unison, alerted him to an apprenticeship opportunity coming up at the company.

Seeking a more secure working environment, Matt was offered the job and, training as an electrical fitter, signed up for night classes at EIT.

“My previous trade as a boilermaker goes hand-in-hand with my role at Unison,” he says. “I’m doing a lot of technical engineering work as well as electrical work.”’

While many of his EIT classmates were school-leavers, there were also students around his own age.

“It wasn’t too bad going back to study. I knew what I was wanting to do and aimed to pass, putting in the effort and getting the result.

“Ray and the other tutors were helpful – wanting everyone to pass, they put in the effort to make sure all the apprentices understood what they were being taught.”

On the night of the awards, Matt already knew he had achieved top marks in the trades exam and that he had won the electrical apprentice category. But he had no idea that the evening’s highlight was to be the overall top apprentice award.

“I was pretty rapt about winning that and my wife was thrilled for me too.”

Last year the couple had another son, Lucas, when Matt was sitting his final-year exam. Now the family are looking forwarded to a special holiday, when they will still be celebrating Matt’s success on a trip to Fiji.

The EIT Hawke’s Bay /Rotary of Greenmeadows other top trades training award, the Repco-sponsored School of Trades and Technology Certificate of Excellence, was awarded to construction student Casey Aranui of Taradale.Caption: Matt Macaulay works as an electrical fitter at Unison.

More in this category: « Wintec students get learning experience of a lifetime in China $13 million for leading-edge biotech research »
back to top
Nov 08, 2018