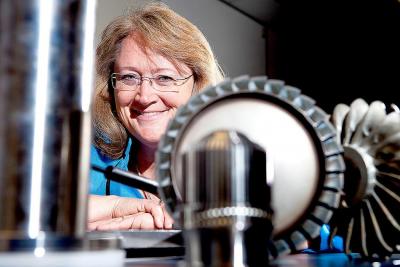 Professor Susan Krumdieck is developing a revolutionary machine that lets you make an anti-microbial ceramic coating on metal.

While the technology might sound like something out of Star Trek, Canterbury University researcher Susan Krumdieck is close to turning fantasy into reality with a substance called black titania – trade name Koti Black.

The mechanical engineering professor is part of a multi-disciplinary team which for 10 years has focused on the engineering of a machine that can make a ceramic coating on metal, creating a self-cleaning touch surface that destroys bacteria and viruses and even pollutants in air and water.

When you radiate the material with ultraviolet light, it gives off radicals that burn a hole in bacteria, breaking down pollutants.

She got a Marsden Grant to study the process in 2003. Then research investment company Powerhouse came on board, looking to commercialise the idea.

They started a spin-off company in partnership with the university, called Koti Technologies, which finds investors and is working to get the antimicrobial coatings into mass manufacture.

This new approach to commercialisation of intellectual property was something Prof Krumdieck pioneered.

“After many years with Canterprise trying to capture IP and keep it in the university, I insisted on a new approach. The university is in the business of doing research, teaching students, and educating researchers. UC is not a manufacturer. I signed over the IP for the black titania to Koti so now it has an asset. I have got shares in the company and I get to do the research with Koti. So I do my job and they do theirs.”

Koti is exploring a range of applications for the technology, including air and water treatment and food preservation.

It’s similar to a ceramic-coated frypan, but produces ‘oxygen radicals’ at the surface – burning up microbes left there by hands, contact with clothing and other objects, as well as from airborne pathogens.

And it could be ready for manufacturers to use “by 2020 or sooner,” Prof Krumdieck said.

Hospitals would be the primary market initially, with the problems of hospital-related infections and antibiotic resistance.

Three companies are interested in manufacturing including French stainless steel producer Aperam is one. The others are a large American ceramics producer and a New Zealand company that makes hospital equipment.

While there have been challenges – they had to move the lab three times after the February, 2011 earthquakes – it’s also a lot of fun, she said.