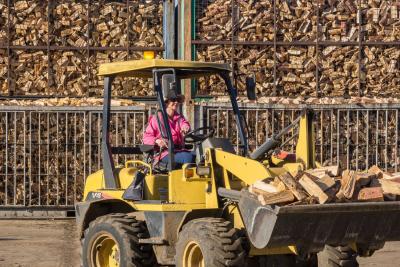 The Christchurch firewood company says people will save a lot more money if they buy their winter firewood next year from them between October and December.City Firewood pioneered kiln drying in New Zealand in 2000. It has the largest purpose-built firewood kiln in the country and is the only New Zealand company which provides kiln-dried firewood on a large scale.It processes as much wood a year equivalent to the weight of the Statue of Liberty or enough wood to fill 20 Olympic-sized swimming pools.General manager Robbie Harris says people should really buy their firewood in spring and summer.“It is much cheaper in the off-season as we are able offer more variety on dryness with enough time to ensure the wood will be ready by winter and the warmer weather enables us to employ more cost effective drying techniques.“Our prices are very cheap up to December, but still relatively cheap right through to March. Many people don’t take advantage of our off-peak pricing which means everyone floods in when it gets cold and we sell out our stored stock very quickly.“When our dry stockpiles run out, we are limited by the amount our kilns can dry which results in delays and we get booked-out months in advance. People who take advantage of our off-season wood not only save around 30 percent on their winter heating compared to peak purchasers, but they also experience virtually no delivery delays.“They can request exactly when they want their wood delivered so it suits them. Many people don’t realise that we do allow people to pay their loads off over a few months rather than a big hit at no extra cost.“We decided to have some fun this year by giving away a $5200 wood-fired Nordic Concepts hot tub so everyone who gets their wood early between October and December has a chance to win that.”Despite the 2018 winter being gloomy and wet, Harris says they have plenty of wood supply for people who may be running out shortly. The MetService says Christchurch, which has had more rain than usual, had its second gloomiest June on record.Harris says City Firewood has seen steady growth demand over the last two years following the large El Nino of 2015-16 which resulted in two unusually warm winters not seen in Christchurch for around two decades.He also says the vast majority of their logs come from sustainable forestry operations which means for every tree harvested, a new one is planted, and for all the CO2 released in burning the firewood, it absorbed over the lifetime of the tree planted in its place.“It’s a renewable cycle and can go on forever without increasing average atmospheric C02 levels. In addition to this our logs are the reject wood from the forest which are unsuitable for timber or export applications so burning firewood is greener than people think.”

More in this category: « Bringing government back to the people: LGNZ and The New Zealand Initiative start ‘Project Localism’ Substantial review of local government funding welcome and needed »
back to top
Jul 03, 2018