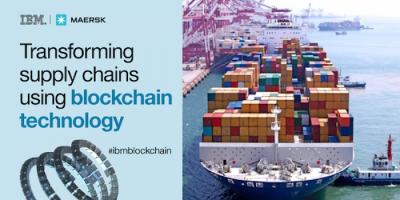 IBM and Maersk have introduced a blockchain shipping solution that will allow the shipping industry to communicate digitally reports Maggie Baska for SupplyManagement.

The two companies have announced the creation of TradeLens, a collaborative venture to support information sharing and transparency across the global shipping industry.

TradeLens will allow different parts of the supply chain, including shippers, shipping lines, port operators and customs authorities among others, to interact via real-time access to shipping data and documents, including sensor data like temperature regulation or container weight.

The system will also allow participants – including exporters and government agencies – to collaborate and exchange information, while the use of blockchain’s distributed ledger technology will provide a “non-repudiable” audit trail.

The system is already being piloted by nearly 100 organisations across the supply chain.

The blockchain solution is the result of a partnership between the tech giant and the shipping firm that was announced in January.

Bridget van Kralingen, senior vice president at IBM Global Industries, solutions and blockchain, said the collaboration with Maersk had shown that blockchain can be used to form a strong network and has the potential to change how global trade is conducted.

“We believe blockchain can play an important role in digitising global shipping, an area of the global economy that moves $4tn dollars of goods every year,” van Kralingen said. “However, success with the technology rests on a single factor – bringing the entire ecosystem together around a common approach that benefits all participants equally.”

The TradeLens “ecosystem” so far includes 94 organisations who are currently involved or have agreed to participate.

More than 20 global port terminals are participating, including the Port of Halifax, Modern Terminals in Hong Kong, Port of Rotterdam Port of Bilbao and terminal operators Holt Logistics at the Port of Philadelphia. These ports account for approximately 234 marine gateways worldwide.

Agility, DAMCO and CEVA Logistics are among the logistics companies that have joined TradeLens. Customs authorities in the Netherlands, Saudi Arabia, Singapore, Australia and Peru are also participating.

Since announcing their blockchain partnership, IBM and Maersk have modified the their original model based on supply chain feedback and have decided to deliver TradeLens through an extension of their pre-existing collaboration agreement.

Standards discussions are underway with global shipping collaborator Openshipping.org to align TradeLens with UN/CEFACT standards. The current TradeLens APIs are available for developer access and feedback.

TradeLens is expected to be fully commercially available by the end of the year.