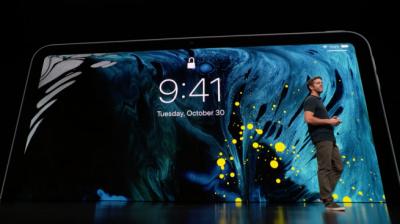 The new iPad Pro has a blocky design with rounded corners for both the display and body. The structure appears sort of like the original iPad. It features a new Liquid Retina display just like the iPhone XR.Display and Face ID

Both new iPad Pros are 5.9mm thin, that’s one millimeter thinner for the larger iPad Pro. iPad Pro now includes Face ID, first introduced with iPhone X, for unlocking the iPad with facial recognition. Face ID also powers Animoji, Memoji, and other features like Apple Pay, logging into apps, and more. Face ID on iPad Pro does not require a notch since the bezel is large enough to house the sensors needed.

More in this category: « Government move on electric trains puts Just Transition on the right track Job advertisements rise by 1.9 per cent in the September 2018 quarter »
back to top
Jun 18, 2018