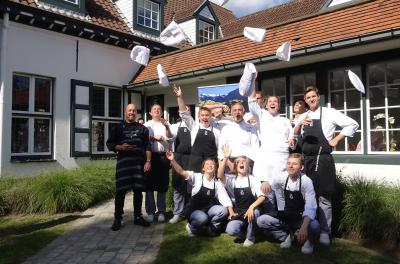 The northern European autumn and winter ‘game season’ remains a key market for NZ venison, even with the industry’s success in building year-round venison demand in other markets. The region is also breaking with tradition and slowly developing a taste for venison as a summer grilling item.

Deer Industry NZ (DINZ) venison marketing manager Nick Taylor says exports of NZ venison to northern Europe for the 2018 game season are expected to be worth about $70 million, about 35 per cent of total venison exports. “Because of successful market diversification, the percentage is well down on what we were seeing 10 years ago, but the northern European game season remains and is likely to remain one of our most important markets,” he says.

During September, DINZ executive chef Graham Brown spent three weeks in Europe working with Europe-based chef Shannon Campbell. They supported venison marketers and their in-market partners in Sweden, Belgium and the Netherlands, as they laid the groundwork for the 2018 game season.

Because of the long hot European summer, the game season began late this year but chefs at NZ venison promotions ordered good quantities for their new menus, Brown said.

With prices for the traditional saddle and leg cuts at historically high levels, he said chefs showed a lot of interest in new and less expensive cuts.

“Chefs love anything different and challenging so it helps extend their repertoire. It also provides a great opportunity for the industry to get better value from the whole carcass.”

The Swedish activity – which involved a week’s worth of demonstrations and hands-on chef and buyer education – went particularly well, reports Taylor.

This was followed by another week in Belgium with importer Bimpex, which partners with venison exporters Alliance and Duncan New Zealand. Later, Brown and Campbell supported importers Kiplama at a hospitality show in the Netherlands. Taylor says Campbell also supported Silver Fern Farms with photoshoots for its game season promotions, as well as undertaking in-store tastings in wholesale markets where chefs shop. At Busche Gala, an annual event in Germany where the country’s gourmet guide is launched, DINZ organised the promotion of New Zealand Venison (Neuseelandhirsch).

“Among many other promotional activities, we have also been engaging with journalists and bloggers around Germany hosting a number of private dinners where they can spend time with prestigious chefs who are supporters of New Zealand venison,” he says.

The deer industry was largely founded on demand from the northern European game season and until recent years it has been the main focus of New Zealand’s venison exports. However, reliance on a single, highly seasonal market was a risk for the industry that venison marketers have worked hard to address.

Taylor says the diversification of markets, a key strategy, saw the United States two years ago become the largest year-round market for chilled cuts. In the same period the US also became a major market for manufacturing grade venison.

“Within Europe, the industry continues to build a preference for NZ farm-raised venison over venison from other suppliers. In recent years, because of growing consumer and chef demand for local produce the challenge of selling products from the other side of the world has become greater. DINZ and venison marketers stress the high standards of food safety and great eating quality which allows the NZ provenance to get cut-through,” he says.

Another, more challenging, ambition has been to build European demand for NZ venison outside the game season. Making this happen has been a key part of the deer industry’s Primary Growth Partnership programme, Passion2Profit.

“Because eating venison in summer is a novel concept for European chefs and consumers, we have promoted summer sales under the banner of Cervena™, an appellation that was new to Europe,” Taylor says.

“This means some leading food service outlets are promoting Cervena in summer and NZ venison in winter. There’s a clear differentiation.”

The summer Cervena programme began four years ago in the Netherlands and Belgium and two years ago was extended to Germany. Sales quickly built to 90 tonnes, worth nearly $3 million, and are likely to grow only slowly from those levels while venison production remains at its current 20 year low. Three of the five venison marketers are actively involved, but all share marketing insights and information with each other and DINZ, as part of Passion2Profit.

“We are building a strong understanding of what works in the summer market, so we can scale up when supply increases,” says Taylor.

“While German culinary traditions are firmly held, we working with a select group of innovative chefs who are looking to differentiate their menus and meet the needs of more adventurous diners.”

Taylor notes that the 2018 northern summer presented challenges for marketers with consumers eating less meat because of high summer temperatures.

“However, what is great is that participating venison companies remain committed to supporting the summer Cervena programme next year.”

More in this category: « New Zealand could be forced to pick a side between US and China' APEC ends in disarray »
back to top
Jul 20, 2018