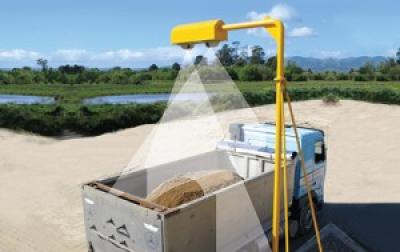 The LoadScan Load Volume Scanner (LVS) is the original non-contact ‘drive-through’ lorry and dump truck load measurement instrument for the measurement of bulk materials volumes, and LoadScan are the leading international manufacturer of payload volume scanner and load management solutions for the construction, mining, mulch and biomass, quarry and sandpit, oil and gas as well as many other industries. LoadScan are the leading experts in volumetric truck load measurement solutions.

The Load Volume Scanner was developed in 1998 to accurately tally the movements of aggregate and spoil being moved onto, off and around earthworks sites.The need for such a product came from the civil construction industry where engineering materials for the construction of roadways, subdivisions, landfills, building sites etc are tendered, scheduled and paid for using volume measures. These materials are generally carted by truck and trailer, and volumetric truck measure is a standard measure for the monitoring or trading of bulk quantities.

Up until this time there was no satisfactory means of measuring load volumes quickly and accurately. Quarries, cartage companies and construction contractors have traditionally used weight as their trade measure. Load volumes are computed from assumed bulk densities (mass/volume ratios), but this method can be inaccurate. It is also labour intensive and time consuming for the contractor who receives product purchased by volume measure to manually level and check each truck load.

LoadScan has continued to develop the LVS product and LVS devices are successfully operated on a full spectrum of truck and trailer designs including on-road truck and trailer units, semi-trailers and centre-dumpers, as well as off-road articulated dumpers and quarry trucks. The Load Volume Scanner (LVS) design for conventional truck and trailer units has been approved for trade use within New Zealand and Australia, trade approval was first gained in New Zealand in 1999 by the New Zealand government’s Measurement and Product Safety Service (MAPSS) and in Australia in 2010 by the National Measurement Institute (NMI). Patents have also been granted for the LVS design.

The LVS is a proven, reliable technology that receives glowing accolades from its users so it is no surprise LoadScan is rapidly gaining recognition in the civil construction, quarrying, Mining and bark & mulch products industries. The Loadscan Load Volume Scanners are working in these industries in 10 countries around the globe, all manufactured and tested at their facility in Hamilton, New Zealand.

More in this category: « Taskforce focused on addressing Auckland airport travel times Petrol companies should show all fuel prices - AA »
back to top
May 25, 2018

How old is the world’s oldest supply chain?