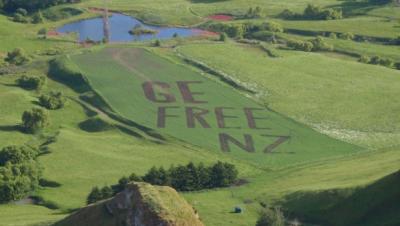 The RLA Bill’s aims are ambiguous but fundamentally change the ground rules to leave councils subject to Ministerial interference. The democratic process of consultation and civil society engagement will become vulnerable to the whim of the Minister. There was no cross party support for the Bill. Recently the Maori Party changed its position, but is now reconsidering it's backing.

The threat to New Zealand's environmental legislation is a two-pronged attack. The proposed National Environment Standards for Plantation Forestry (NES-PF) is in its final stages [4], if adopted will also remove the right of councils to apply land use precautions on GE trees. Environmental harm caused by release of Genetically Engineered Organisms and costs associated with economic loss will also be forced onto regions, despite the communities wanting to preserve GM-free production.

"New Zealand businesses that are successfully exporting to the world are at risk from powers that will allow the Minister of the day to remove precautions around GMOs," said Jon Carapiet, national spokesman for GE-Free NZ.

"Moves to override regional controls on GMOs in agricultural production would be tantamount to self-sabotage of the national brand and destroy any hope of reaching the government's stated economic goal of doubling exports."

The proposed RLA legislation, section 43A(3)(b), signals a power grab by the Minister as the government would not need to demonstrate that the permitted activity has a significant adverse effect on the environment, undermining the very purpose of the Resource Management Act as well as the Hazardous substances and New Organisms Act. The purpose and principles of the Acts, which require scientific research, community consultation, and a precautionary approach on land use activities, would be immediately nullified.

“It is absurd for central government to be absolving itself of its duty of care to demonstrate the safety of GMO’s, yet simultaneously forbidding regional government to apply policies and measures that protect communities and regional economic development for the long term," said Claire Bleakley, president of GE-Free NZ.

"Nick Smith is effectively setting up a system that will enable destruction of the environment and sabotage the interests of people and communities.”