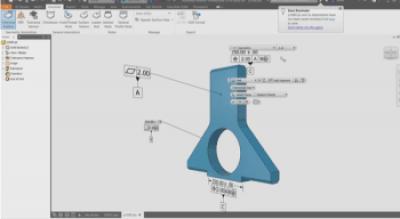 With a new year comes an inevitable update of your CAD package, and that always begs the question, should I keep my license or upgrade? Well, with Autodesk Inventor and the company’s new subscription-based plan, that decision has likely been made for you, and now it’s time to reap the benefits.

Inventor 2018 has been on the market since last week, and for those looking for the latest features in their CAD tools, here’s what you can expect from the latest version of Autodesk’s flagship mechanic design package.

Demand and model-based engineering (MBE) as a standard CAD paradigm is increasing throughout the design world. Not only are big-time movers and shakers like the DoD insisting that fluency with MBE be a prerequisite for any contractor, the ever-tightening integration between design, prototyping and manufacturing is making MBE coin of the realm.

To give users the tools they’ll need to meet this new design focus, Inventor comes equipped for model-based design (MBD) tools that make it easy to annotate models with tolerance information, critical dimensions and manufacturing notes so that a project can move from modeling to CMM and CAM in a flash. In addition, Inventor users can output 3D PDF files so that design information can be effectively communicated to manufacturers off-site.

Designers today have to deal with a number of variables when building a product. One of the most consistent of those variables is that a team will likely be interacting with a number of third-party vendors and, most likely, a few different CAD file formats.

In the past, having to juggle multiple file formats made collaboration with third-party products awkward and time consuming, but in Inventor 2018, the software supports a number of different file flavors and formats, making it easy to leverage the design work that’s already been done by others so that workflows are streamlined.

Customer-Driven Enhancements Round out 2018

Aside from MBD and interoperability enhancements, the Inventor engineering team has tapped its deep user base to implement over 50 Inventor Idea requests into 2018. Whether it’s improvements to such essential features as “Chamfer,” “Extrude” or “Hole” commands, Inventor’s refinement is reaching a level that’s difficult to match by other CAD programs. But modeling features aren’t the only aspects of the software that have seen improvements thanks to user input. In Inventor 2018, the “Measure” tool has been simplified and improved to make it easier to use, and bill of materials (BOM) and parts list sort orders have been made easier to organize based on user input commands.

Published in SOFTWARE
Tagged under

More in this category: « Pegasystems looks to NZ market for business growth AutoCAD Is Still the Champ »
back to top
May 31, 2018