Algae harvested and made into shoes 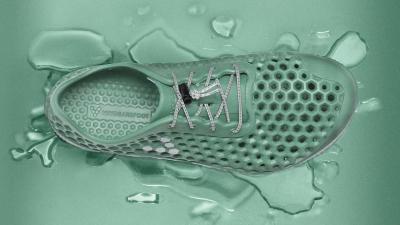 To get enough algae to make one pair means cleaning 57 gallons of water, which are then returned to the lake. [Photo: courtesy Vivobarefoot]

After a massive explosion of algae growth in China’s Lake Taihu a decade ago left more than two million people in the area temporarily without safe drinking water, the government started spending hundreds of millions of dollars a year to try to solve the algae problem. One part of the solution: working with a company that harvests algae from the lake before it grows out of control, and turns it into a flexible, rubbery material that is now being made into shoes.

Vivobarefoot’s water-resistant Ultra III shoes are usually made from a petroleum-based version of the same material, ethylene-vinyl acetate (EVA). But a version that will launch in July is made from a blend of algae and EVA, instead. To get enough algae to make one pair means cleaning 57 gallons of water, which are then returned to the lake.