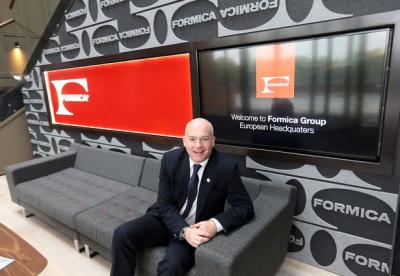 The New Zealand owners of Formica Group Europe, Fletcher Building, have pledged to plough £40m into the UK sites over the next three years, radically transforming and upgrading its production facilities and offices in a move to drive up its UK market share.

Formica has been a major employer in the North East’s manufacturing sector for more than 70 years, making laminate products for the residential and commercial sectors at its sites in North Shields and Newton Aycliffe, County Durham.

Peter Rush, president of Formica Group Europe, revealed full details of the investment plans for the first time at a special open day at the Coast Road site, bringing together industry leaders, politicians and directors as the firm cemented its commitment to the North East.

The investment is being made in three phases, the first of which has seen the relocation of around 100 office staff from Cobalt to the Coast Road base, which will now serve as the European headquarters – a decision backed by the New Zealand parent company after the Brexit vote last June.

Mr Rush outlined other significant spending plans which will bring new machinery and upgrades for existing machinery, which could potentially create new jobs.  There are plans to centralise manufacturing activities under one roof in the west factory, located behind the east building, and new products are also being introduced in a bid to grab a greater market share.

Mr Rush said: “In 2015 Formica took a big deep breath and said: ‘What are we going to do with Formica Europe?’.

“If you look back at its performance over the previous five years, it was one of those moments when you either invest and get behind the business, or you might need to find another option.

“Flectcher Building has been a fantastic parent company. They are thousands of miles away and they are allowing us to spend £40m over the next three years, and that’s a huge amount.|  A ChronicleLive release  ||  June 6, 2017   |||

More in this category: « Domestic Manufacturing Sales Leading the Way - NZMEA Rise of the machine manufacturer »
back to top
Mar 08, 2018