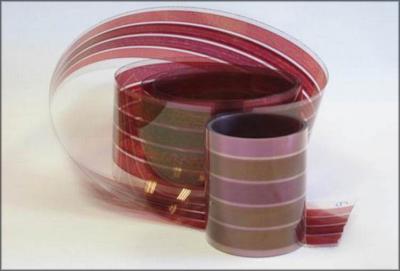 When it comes to solar panels, the future is flexible. Vanessa Young discovers how a MacDiarmid project is unlocking the possibilities of a new generation of solar cell technology.

When we imagine solar panels, we think of hard rectangle frames, sitting upright on roofs, or spread out across expanses of deserts.

Printable solar materials that will allow all of this is closer than we think. Victoria University associate professor Justin Hodgkiss, lead researcher in a MacDiarmid Institute project investigating the possibilities presented by ‘printable photovoltaics’, says they will be low cost and could replace silicon as the next generation of photovoltaic (solar energy) materials.

“Silicon cells are getting cheaper but still require a high-temperature, high vacuum manufacturing process. For solar energy to be really accessible it needs to be much cheaper and faster to manufacture.”

He says these printable semiconductors, including polymers and nanoparticles, can potentially be manufactured on a roll, cutting production costs.

“Their ease of transport and light weight also mean it is feasible for these to be manufactured in New Zealand and shipped anywhere in the world.”

Shiny is the enemy of good

When we see photos of those bright shiny swathes of solar farms, we don’t automatically think of their shininess as a problem. But Hodgkiss says an ideal solar panel would look black.

“Every bit of light that reflects off a solar panel is light not transformed into energy. When no light bounces off it means all visible light is getting in.”

This is where nanotechnology comes in. He compares the idea to radio antennae on the roof of a building.

“When you see large antennae on the top of buildings, their size is related to the radio frequencies they’re tracking. Radio waves are of the order of metres, so the antenna discs are this size. But optical wavelengths are in the order of hundreds of nanometres.”

He says the MacDiarmid teams working on this are effectively creating tiny antennae that capture light and can direct it inside the solar panels.

“We’re making nano-patterns that make sure that light gets in and is not bounced away, and that capture and focus the light waves directly where it is needed in the solar panels.”

More in this category: « Blockchain, Automation Will Drive Logistics Sector Advancement Ara is conducting a week of Antarctic-themed, interactive school holiday programmes, and some high profile, international visitors are on the way. »
back to top
Nov 26, 2018