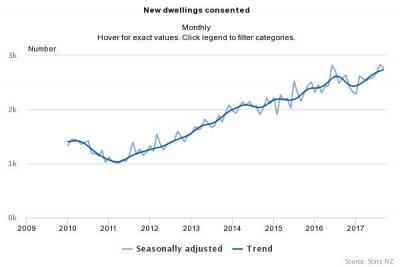 31 Oct:  Building consents for new homes fell in September 2017, following a recent run of increases, Stats NZ said today. “The seasonally adjusted number of new homes consented fell 2.3 percent in September compared with August, after rising in each of the previous four months,” prices, accommodation, and construction senior manager Jason Attewell said. “Home consents have trended upwards recently, and are at a level last seen in 2004.”Some 2,770 new homes were consented in September 2017, up 6.0 percent compared with the same month in 2016.

On an annual basis, 30,892 new homes were consented in the September 2017 year – up 3.0 percent compared with the September 2016 year, despite a large fall in Canterbury. The national increase was driven by townhouses and apartments, with slight falls for retirement village units and houses.

The regions consenting the most new homes in the September 2017 year were:

Note: We have improved the way we calculate the seasonally adjusted number of new homes consented. We now include an adjustment for the timing of Easter. As a result, the seasonally adjusted increase in the number of new homes consented in August 2017 has been revised down from 10 percent to 5.9 percent. For more information, see Building consents issued seasonal adjustment and trend changes in September 2017 on DataInfo+.