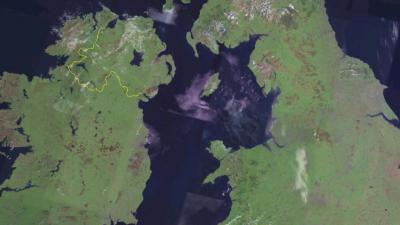 Jan 25, 2018  -  The Democratic Unionist Party has backed a crossing between Northern Ireland and Scotland, proposed in response to Boris Johnson's suggestion to build a bridge between Britain and France.

A bridge across the Irish Sea was proposed by Scottish architect Alan Dunlop as a direct response to the "Boris Bridge" suggested by the UK's foreign secretary, which would see a 22-mile-long crossing built between Britain and France after Brexit.

But while Johnson's suggestion was largely met with ridicule by industry figures, Dunlop's proposal is gaining momentum.

According to a report in The Times leading figures in the Democratic Unionist Party (DUP), which has a confidence and supply agreement with the Conservative party, are backing the proposal.

Sammy Wilson, a senior DUP MP told the Belfast News Letter, "People used to think the Channel Tunnel was pie in the sky. This idea of a fixed crossing has been derided as nonsense for years, but it is entirely feasible from a technical point of view."

A second DUP spokesperson stated that a bridge across the Irish Sea could "act as a catalyst for developing further links between the two islands".

Dunlop, founder of Alan Dunlop Architects and visiting professor of architecture at Aberdeen's Robert Gordon University, believes that a bridge between the two countries would cost between £15 – £20 billion and would help to create a "Celtic powerhouse".

According to Dunlop, the crossing between Scotland and Northern Ireland would cost much less than Johnson's bridge between Britain and France and would also bring clear economic benefits to the two countries.

"I'm not against a bridge from England to France, it's not an either/or response," Dunlop told Dezeen. "A bridge crossing the English Channel, which is one of the world's busiest shipping lanes, would be economically challenging. This is why I said it would cost less to move France closer, although I have no doubt it would be technically achievable."

"A bridge between Scotland and Ireland is much more achievable", he continued, "and it would redress the balance of money being spent by Westminster on London, East Coast transport and other projects."

While Dunlop estimates that an English Channel bridge would cost £120 billion he believes that a bridge between the two Celtic countries could be built for considerably less.

He suggests a combined road and rail crossing, similar in design to the Øresund Bridge that connects Denmark and Sweden, could be built between Portpatrick, in Dumfries and Galloway, and Larne in Northern Ireland at a cost of £15 to £20 billion.

"The Oresund Straight bridge has brought huge economic and social benefits to Denmark and Sweden, creating a new economic region of almost 4 million people and generated £10 billion economic benefits to both countries," said Dunlop. "Such a bridge could do the same for Scotland and Ireland, economically, culturally and socially and boost tourism."The proposed bridge could take the form similar to the Øresund Bridge linking Denmark and Sweden. Photo by Susanne Nilsson

Although at 28 miles this crossing would actually be longer than the proposed bridge across the English Channel – technically, the bridge would present less of an engineering challenge according to Dunlop.

The main engineering challenge for the crossing would be Beaufort's Dyke, a two-mile-wide, deep-sea trench off the Scottish coast. However, Dunlop believes that a design incorporating the emerging technology of floating bridges could carry the crossing over the dyke.

"It is the right time [to build a bridge across the Irish Sea] because we now have the technical capability to do it," said Dunlop.

More in this category: « Self-healing concrete uses fungus to fill cracks World’s Biggest Infrastructure Project is One You Never Heard Of »
back to top
Mar 07, 2018