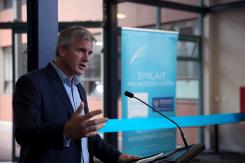 “We have some major opportunities in front of us. With the strong team and partnerships we’ve got in place to lead liquid innovation within our business, we won’t miss a beat,” he says.

The Vice Chancellor of Massey University, Professor Jan Thomas, opened the facility and highlighted the important new relationship between Synlait and the university.

“The establishment of Synlait’s new Research and Development Centre at Massey’s Manawatū campus is an excellent example of industry and the university collaborating closely to achieve real, tangible outcomes,” says Professor Thomas.

“Strategic partnerships like these are vital if we are to start and grow new industries, create new jobs, and to remain competitive in the global marketplace. Massey University is New Zealand’s premier provider of food research and education, and at the forefront of pioneering such partnerships with the food industry.” she says.

“It’s fantastic to now see commercial companies such as Synlait organically using the value of Food HQ and Massey University. Assisting companies with R+D and commercialising their products is one of Food HQ’s key roles,” says Mr Smith.

“The City of Palmerston North is part of Accelerate 25, a regional economic development programme for Central New Zealand, and Food HQ is one of the key enablers in this programme to grow business,” he says.

The MP for Palmerston North, Iain Lees-Galloway had to be called away at the last minute, however he left a message for those at the opening, welcoming Synlait to the region.

Synlait Palmerston North is a partnership with Massey University and FoodPilot, one of the New Zealand Food Innovation Network’s four hubs.

The Palmerston North team will primarily concentrate on innovative dairy liquid product development, as well as supporting processes and technology.

“We are serious about growing and applying our research and development expertise to maintain a competitive edge. While Palmerston North is focused on dairy liquids, we have teams elsewhere working on nutritional powders, packaging and many other areas.”

Synlait plans to double their investment over the next two years, having committed around $7 million to research and category development in the current financial year.

“We’ve established an R+D Centre in Palmerston North and will be investing around $2 million on additional equipment for the FoodPilot facility, which can be used by others,” says Mr Penno.

Synlait currently has around 35 staff members working within the Research and Development Team, but this will continue to grow as Synlait Palmerston North ramps-up its operations.

More in this category: « New Zealand's two-way trade with China more than triples over the decade Blenheim biotech firm to 'double' production with European investment »
back to top
May 17, 2018