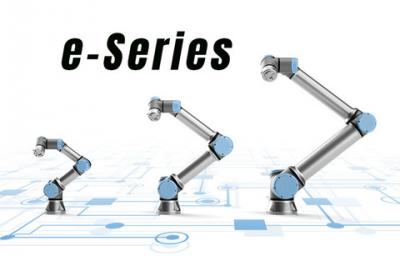 Sydney, 20 June 2018 – Universal Robots, the pioneer and market leader for collaborative robots (cobots), is continuing to evolve its ground-breaking, collaborative automation technology with the introduction of its new flagship e-Series cobots. The new range follows recent industry recognition for Universal Robot’s co-founder, Esben Østergaard, who won the 2018 Engleberger Award, considered the ‘Nobel Prize’ of robotics.The e-Series cobot platform includes technology advances that enable faster development for a wider variety of applications. Improvements include the ability to economically deploy even more applications, thanks to greater precision and sensitivity provided by a built-in, tool-centric Force/Torque sensor.Like other Universal Robots offerings, the new e-Series offers unparalleled convenience. It takes just one hour to unpack the cobot, mount it and program the first task. A wrist-join-tool communication interface reduces production line integration time and complexity, and all joints can be replaced in 2 to 6 minutes.A re-designed intuitive and responsive-touch user-friendly interface streamlines program development by simplifying programming to a few clicks on a new lightweight, wide-screen Teach Pendant.17 safety functions, including customisable stopping time and distance, make collaborative automation easier. Certified by TÜV Nord all safety functions are in compliance with the industry best-practice EN ISO 13849-1 and EN ISO 10218-1 (Cat. 3 PLd) machinery safety standards for unobstructed human-robot collaboration.As with all Universal Robot models, e-Series users can expect a fast return on investment, a cobot system ready for any future application, and long-term productivity gains.“Our e-Series platform is leveraging our years of experience as the market leader within collaborative robots,” says Jürgen von Hollen, President of Universal Robots. “The ‘e’ in e-Series underpins our key vision and overall product philosophy, specifically Empowering people and making it Easy for Everyone.”With the e-Series launch, Universal Robots now provides two different technology platforms. For customers interested in cobot capacity expansion for proven applications, the G3 is an ideal choice. The e-Series benefits businesses with advanced applications and diverse or uncertain future needs.Growing Importance of Automation in Australia and New Zealand

Demand for automation and robotics continues to grow in Australia and New Zealand, particularly in the packaging, metal and manufacturing, food and beverage and pharma industries. According to the International Federation of Robotics, an average of 83 industrial robots were installed per 10,000 employees in Australia, with fewer in New Zealand. However, for advanced economies uptake of robotics has been comparatively low: Australia and New Zealand currently rank 21st and 27th in the world for robotic deployment respectively. Even in the face of national issues that automation can help to address – such as relatively small populations, high labour costs, and geographical remoteness – ANZ businesses’ use of robotics ranks currently behind countries like Slovenia and the Czech Republic, although the numbers are growing. Shermine Gotfredsen, General Manager, Southeast Asia and Oceania at Universal Robots, said: “Cobot demand is growing in the region as automation is increasingly becoming a necessity for businesses to achieve greater production efficiencies amid rising operational costs, labour shortages and increasing competition. With the e-Series and G3 product lines, we now offer customers two distinct technology platforms, catering to a wider range of business needs.” “We’ve seen strong uptake of our technology in Australia and New Zealand (ANZ), with customers ranging from multinational brands like AstraZeneca to small and mid-size businesses like Prysm industries in Melbourne. We’re confident our new range will see more uptake in the region, to help boost competitiveness and producvitiy,” said Ms Gotfredsen. End-user benefits “End-users with complex applications and diverse or uncertain future needs will benefit from the e-Series platform and our unique Universal Robots+ ecosystem knowing that their investment will be able to grow with them as their needs change,” added von Hollen. “We enable innovative customers to rapidly drive adoption of automation technology into their businesses to maximise their competitive advantage.” “The global cobot market is expected to continue to be one of the key growth drivers in the automation market the coming years. With the e-Series, my expectation is that we at Universal Robots will continue to leverage our position as the cobot market leader. This, however, can only be done by staying ahead technologically, hence the launch of e-Series,” said von Hollen, emphasising the importance of Universal Robots+ and the online training program Universal Robots Academy which will both support the e-Series platform. The e-Series is now available. Universal Robots plans to begin shipping units to customers from 1 August 2018.

More in this category: « Robot Workers: Will Engineering Jobs Be Automated? ABB launches OmniCore, a new era of digital robot control to increase flexibility, reliability and performance »
back to top
May 17, 2018