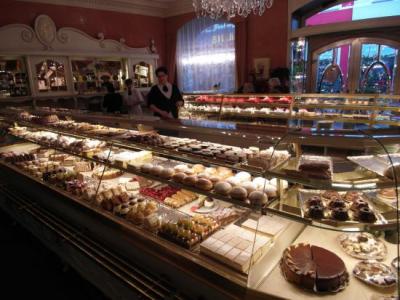 Bad Ischl, some 50 kms East of Salzburg is a small spa and resort town in the Salzburg province, an area of jade green lakes, steep mountains up to some 1500 metres, and lovely meadows now much built up with chalets and hotels but still rural and idyllic. In the current hot, dry, blue sky weather the colours are wonderfully vibrant and the whole area seems unreal in its striking if slightly comic opera beauty. A sort of open air Fledermaus set.

Which is not surprising since Franz Lehar who wrote Fledermaus lived and worked in Bad Ischl.

However, and like so much of the summer tourism world of today, the Salzkammergut is grossly overcrowded with cars, bicycles, and people everywhere. On arrival in Bad Ischl at 1100 no parking to be found until, miraculously, a space appeared outside the fine 19C railway station still painted, as is the old post office, in the characteristic Imperial buff colour of the public buildings of that pre-WW1 period.

Bad Ischl still has a medicinal spa and, judging by the ages of those in the area of it, it may be offering eternal life among its benefits since, by observation, the local age bracket was between 80 and 110 with the emphasis in the upper quartile.

The Emperor Francis Josef's mother took the waters to be cured of her seeming infertility in 1828 and promptly gave birth to him and a sibling. Born in 1830 he lived until 1916 and, in a series of filial pieties on an Imperial scale, took his summer holidays in Bad Ischl from 1854 to 1914.

It was in his summer villa that he signed the declaration of war on Serbia that began WW1 and ended with the collapse of his empire. The place is famous for a deadly but delicious dessert of eggs.,cream, and sugar called "Kaisersschmarren".

Austrians love coffee houses and sweet cakes and pastries and, still thriving in now demotic Bad Ischl is the world-renowned Cafe Zauner (pictured) which offers temptations served by a solicitous staff which are, one hopes not literally, to die for.

But not today. "Live every day as if it were your last" wrote that Stoic Marcus Aurelius. Eat a Zauner iced pink sponge cream cake today and you can then give up.

More in this category: « Emirates celebrates 15 years of connecting Auckland to the world Grab a 7 day Cruise of the Hawaiian Airlines »
back to top
May 02, 2018