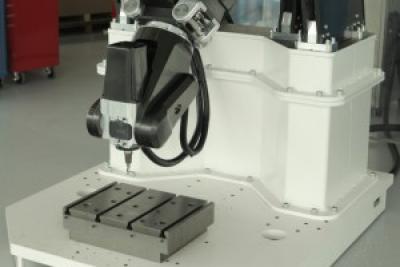 The Advanced Manufacturing Research Centre in Sheffield has developed what is believed to be the world’s first carbon composite reconfigurable machine-tool.

Lightweight and made using a modular design, the tool can be easily moved around by two people and, according to the AMRC, could reduce tooling costs in aerospace and other industries.

The tool was developed in collaboration with system manufacturer Exechon, which specialises in a type of machine tool using a system known as parallel kinematics. Rather than mounting all of the axes of the machine in a row, with the ‘end effector’ that holds the actual cutting or milling tool on the end, parallel kinematics mounts the end effector between two movable arms that hold the workpiece and move it through the X, Y and Z dimensions. Proponents of this system say that it can move as flexibly within the same volume as the conventional serial linkage type of machine tool, but with greater accuracy and stiffness.

“Making the structure modular and from composites means the robot can be dismantled and moved easily by two people,” said Ben Morgan, head of the AMRC’s integrated manufacture unit. Moreover, because composites are less susceptible to thermally induced expansion and contraction than metals, the conditions inside the factory will have less effect on the robot’s accuracy, he added.

The machine tool was made as part of the AMRC’s contribution to the Factory of the Aircraft Future project, a UK government-backed initiative to help protect the country’s status and expertise in the aerospace manufacturing industry. It was also a collaboration within the AMRC itself, with most of its parts made by the Composites Centre and its metal components made by the Machining Group and apprentices from the Training Centre.

“Potential applications include drilling and milling holes in wings faster and without having to make major investments in purpose-built machine tools, which cannot be moved easily,” Morgan said. The integrated manufacturing group is now running tests on the machine tool to fully validate it.

Release published in The Engineer

More in this category: « Sew-Eurodrive launches revamped website Atlas Copco plans to split in two »
back to top
Mar 23, 2018