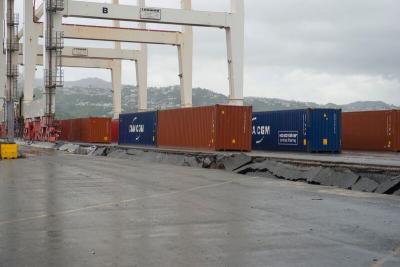 Next week CentrePort will begin work to secure its gantry cranes, as it develops plans to resume modified container operations within four to six months.

The 14 November earthquake caused significant damage to the Port, especially to the container area. This made its two gantry cranes inoperable. Each crane is 86 metres high and weighs 720 tonnes.

“Over the coming weeks we will secure the cranes, as the first stage in our plan to develop operations for customers and build resilience in case of another significant event,” Chief Executive Derek Nind said.

“Meanwhile, we continue to work with shipping lines on options for using geared ships as an interim solution. We have already had two of these visit the Port since the earthquake.

“For the medium term we are developing a plan for interim works that could restore modified container operations within four to six months. This would immediately improve CentrePort’s capacity and productivity, allowing us to serve the needs of importers and exporters in the central region. We will be keeping our customers informed as these plans develop.

“We know how important container shipping is to the regional economy. That’s why we worked hard to quickly restore limited container movements using ships with their own cranes. We are now assessing longer term options, to keep freight costs low for Wellington’s businesses.

“Over the coming days CentrePort will also commence maintenance on the berth pockets alongside part of Aotea Quay wharf. This will increase the flexibility of operations at the Port, since the earthquake has damaged Aotea Quay 1 and Thorndon Container Wharf.

“CentrePort is grateful to its customers for their ongoing support and patience during the recovery process.”