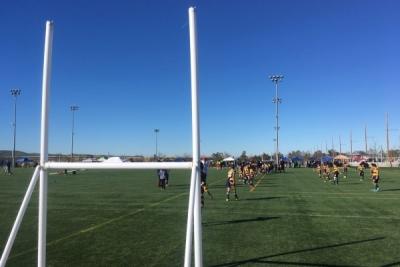 Over 600 players and more than 3,000 fans had a new experience at one of the USA’s largest junior rugby tournaments, thanks to one of a kind portable Junior Rugby Packaposts designed by New Zealand company Packaworld International.

The Rhinos Rugby Stomp was hosted by Rhinos Rugby Club on Sunday 29 January at Great Park in the city of Irvine, California. The tournament featured Under 14 age group teams from nine clubs across California.

Junior rugby is often played without posts, particularly in the US, where many sports fields are set up for other sports.Rhinos Rugby Program Director Elvis Seveali’i, a former Manu Samoa rugby star, said the free-standing inflatable Junior Rugby Packaposts brought an extra dimension to the tournament, and had massive potential to help grow grass-roots rugby in the USA.

“These are the perfect size for children. It gives the effect that they’re playing in the real game, and this will be a major factor in attracting new players to the game of rugby.”

The lack of posts at junior level meant kicking was not introduced to the game until around the age of 16 or 18, when senior rugby posts could be used. The portable Packaposts could be transported in a small car, did not damage artificial fields and had the potential to enable kicking and make the junior game closer to senior rugby, he said.

“These posts are going to make such a difference. I think it’s a great idea.”

Mr Seveali’i said the turnout at this year’s Rhinos Rugby Stomp had been excellent thanks to a major influx of players over the past year in the growth sport of rugby.

“A lot of the rugby community was there. The kids had a great time and it was fantastic to see so many supporters on what turned out to be a huge day for junior rugby in California.”

More in this category: « New layout for final holes of NZ Open Golf unveils a modern set of rules to make it easier to play »
back to top
May 17, 2018