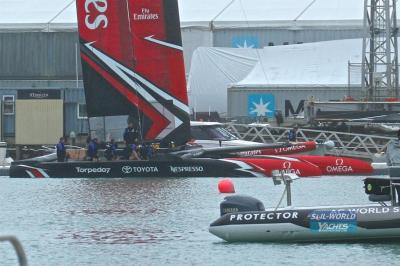 Emirates Team New Zealand have splashed their new AC50 in Auckland this morning and revealed another break-though.

In the 2013 America's Cup the team designed the first foiling catamaran even though that concept was not contemplated in the rules. It was widely reckoned that they revealed their secret too early and other teams were able to copy in the time available.

All other teams have used conventional arm driven grinding pedestals which are a lot less effective, cannot be driven for extended periods at a high heart rate, and use a much weaker muscle group. The bonus for Emirates Team New Zealand is that they have four grinding positions per side, while the other teams have two - but with two grinders on each.

The use of cycle pedestals where the crews pedal to provide the power are not new; they were tried in the 12 Metre Class in 1977 by the Swedish Challenger, Sverige. In that use, the crews were mostly below decks, which also reduced windage.