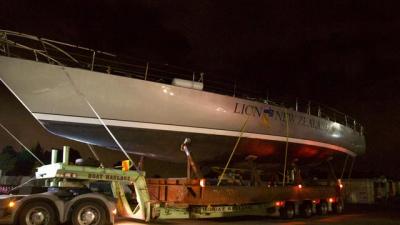 Chris Jefferies reports in Boat International that the 24.38 metre maxi racing yacht Lion New Zealand has checked into Yachting Developments for an extensive winter overhaul. The works, which began on May 15 with her haul-out, are described as a “top-to-bottom refit”.

Designed by Ron Holland and launched in 1985 for Sir Peter Blake, Lion New Zealand raced in the 1985/86 Whitbread Round The World Race. She was purchased in 2008 by the NZ Sailing Trust, which uses her to provide sailing experiences for young New Zealanders.

In the past nine years, Lion New Zealand has covered more than 200,000 nautical miles, welcoming thousands of guests on board along the way, and the trust explains that she is in need of a much-deserved refit.

More in this category: « Air New Zealand launches global search for All Blacks Apprentices Can a bike pass a V8 on the highway? »
back to top
Jul 30, 2018