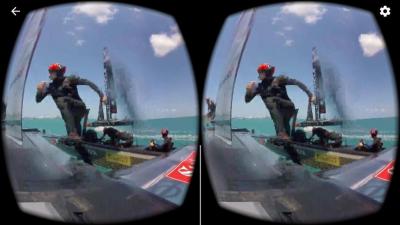 With Challenger and Defender intently going over their America's Cup campaigns and trying to evaluate the other's performances, there is a fair chance that they'll be looking at the latest content from a new 3D Video application which takes them aboard their rival's AC50 - sitting in the 'shotgun seat' wrote richard Gladwell earlier this week in sailingworld.com.

Earlier in the 35th America's Cup Regatta, Race Director Iain Murray confirmed that the teams would have full access to a suite of performance data from their competitors.

That is expected to include content that Oracle Team USA and Emirates Team New Zealand have recorded from an onboard camera stack to gather content for a new 3D Video viewing experience.

The application is the latest development from New Zealand-based Animation Research Limited or ARL who first made their mark 25 years ago with real-time graphic animation in the 1992 America's Cup in San Diego.

That product, now Virtual Eye, while originally designed for the TV broadcast has been extended into a multitude of platforms and devices from mobile phones to PC's smart TV's. ARL have used their market leader position to dominate the sports animation space - covering everything from gliding to cricket, motor racing and golf, as well as sailing.

More in this category: « Global beverage brand approval to supply SCS Connect The best smartphone tech coming your way in 2017 »
back to top
Jun 01, 2018