Fero’s on the move at Vaitele 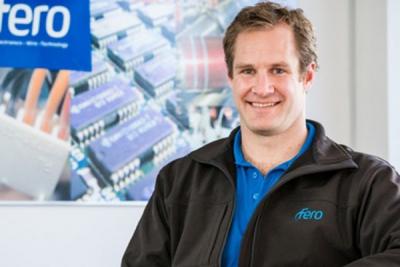 1 Nov - New Zealand wiring company, Fero, is on the move. And unlike most companies moving overseas, Fero is moving to Samoa. From China to Samoa to be exact.

The family-owned company saw an opportunity in Samoa when Yazaki Samoa closed its doors.

Yesterday, General Manager, Sam Fulton and Managing Director, Greg Fulton, were at their new premises at Vaitele. While there is a lot of work to do, they are looking forward to growing their company and to help Samoa.

While it is not common for a major manufacturing company to set up in Samoa, for Sam and Greg Fulton, the move made financial and logistical sense on many different levels.

Fero had been manufacturing in China for some time and the distance and rising costs were one of the factors that made it easier to move their operation to Samoa.

Furthermore, there were quantity issues with New Zealand and Australia being smaller markets than China was used to.

“In New Zealand and Australia, when you start saying to everyone that we are going to start manufacturing in Samoa - most people are a bit surprised about that,” said Sam Fulton.

“There’s not a lot of manufacturing going on in Samoa for export to New Zealand and Australia.”

The added benefits of having a workforce that was trained by the world class Yazaki proved to be even more of an incentive to set up shop in Samoa.

“It’s fantastic because Yazaki have done a great job of training everyone up,” said Sam, “There’s a lot of good talented people who have got a lot of experience."

“Most of the guys have got over 20 years’ experience in the harness industry. There’s a building here that is custom built for wire harnessing manufacturer. We have got enough space to fit about 500 people into it pretty easily. At the moment we have about 75 people that we have employment agreements with and we have a goal for having 200 employees.”

Fero’s General Manager confirmed that they will be hiring their employees at the same rate that they were receiving at Yazaki and that it was important for them to make sure they stayed on level with the Samoan government pay rates.

It’s also part of their strategy to make sure that all the stakeholders in the business are rewarded for the success of the business.

Both company managers anticipate some challenges ahead.

“It’s not going to be easy getting a good operation going on here and delivering to the rest of the world,” he said.

"Freight is not as regular in getting into New Zealand, we still get our raw materials out of China often and they have to go through NZ to here. We have issues with our business in NZ, we are under no illusions, and it’s not an easy business.”

While challenges are to be expected, the transition has been relatively easy in that being in your own Pacific backyard provides a sense of familiarity both in a social and business sense.

The Company Managers also credited the Samoan government, N.P.F. and the New Zealand High Commission for making the process of establishing a business here run smoothly.

“Samoan culture is different to New Zealand culture but we have quite a lot of similarities,” said Sam. “We have a lot of Pacific Islanders working with Fero in New Zealand and it’s a much easier fit culturally than China."

“For a number of reasons such as; travelling here is easy, we speak in the same language and live in the same time zone which helps when you pick up the phone to make a call and we drive on the same side of the road but it is nice to make sure that work stays with our neighbours in the Pacific.”

Managing Director, Greg Fulton added: “We absolutely respect the talents and the abilities here. We have a really well trained and educated team that’s something that we have found right through Samoa, that the skill all the way through the infrastructure through government is really high, that’s a very easy fit.”

Sam Fulton has been quoted in the New Zealand media, calling Samoa as the best kept secret in manufacturing, even going as far as urging other companies in Australasia to look closer to home instead of looking out towards Asia manufacturers.

“When I say that it’s the best kept secret I think that there’s a lot of opportunity for manufacturing in Samoa for NZ and Australia and not just in wire harnessing either."

“We’re also looking at doing a few other automotive products here. You’ve got the infrastructure to export to different countries. It could be that manufacturing can become an industry for Samoa rather than always just relying on tourism and agriculture.”

Setting up in Samoa has given both Sam and Greg Fulton some personal satisfaction in that they have realized that they have come to a place that genuinely appreciates their presence and what they have to offer for our people and the economy,

“It’s been really rewarding, right from the word go,” said Greg Fulton. “Anytime we’ve been involved with different people about what we are doing here and what we are planning to do here, so many people at so many different levels have said ‘thank you very much for coming into Samoa, we are grateful of that’ and that sort of thing is really good to hear and it’s very encouraging. To know that they believe that you can make a difference has got a heck of a lot of reward.”

More in this category: « Samoa’s bed factory on the move Special cover for Kiwi manufacturers cautious about food risk »
back to top
Apr 04, 2018