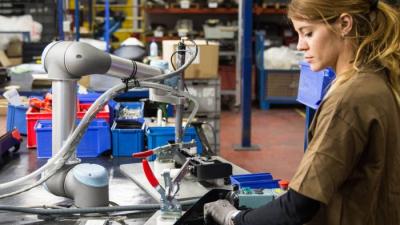 2 Nov[] The increasing interconnection of devices and vast flows of data between machines are transforming factory floors around the world.  From robots that work alongside humans to tracking components throughout the logistics system, the internet of things (IoT) is reshaping the way products are designed and made — and changing the role of humans in manufacturing.

CobotsUnlike traditional industrial robots hidden behind cages, like those that weld car bodies, collaborative robots — or cobots — work alongside humans and have been spreading across production lines.

They are typically smaller, flexible and mobile, as well as being cheaper than their heavy-duty cousins. They are also slower, but cobots are highly adaptable and can be assigned to different tasks.

“[Cobots] can learn by imitation. They tend to have cameras with vision recognition software. You can move the hand of the robot, you do a task and after a few minutes the robot is programmed,” says Jonathan Cohen, portfolio manager of the $90m RoboCap UCITS Fund. This compares with 50 to 200 hours to program larger industrial robots, he adds.

One of the biggest cobot manufacturers is Universal Robots of Denmark, which was acquired for $285m in 2015 by Teradyne, a US supplier of automation equipment. Uses of its machines include putting confectionery in boxes, polishing objects and screwdriving.

While many fear that robots will steal people’s jobs, proponents say cobots can improve health and safety conditions for humans by performing repetitive tasks that require uncomfortable movements such as twisting or lifting heavy objects.Additive manufacturingThis is also known as 3D printing, because it involves building objects layer by layer out of substrates such as polymer or metal. Complex patterns based on digital designs that may not be possible with traditional manufacturing techniques can be made with less material and fewer process steps.

Additive manufacturing has existed for more than three decades but has been limited by its expense and slowness. However, more real-world applications are emerging.

More in this category: « The CIO’s guide to driving digital transformation Big future in little cousin of education exports – edtech »
back to top
Jun 14, 2018