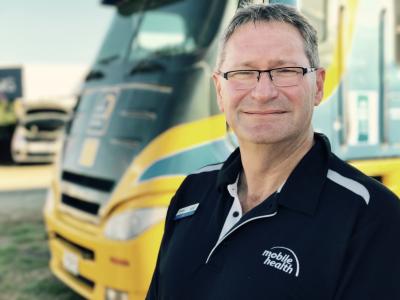 Dec 13, 2017 - The national surgical bus, possibly the only one of its type in the world, is looking for a significant change next year to keep up with demands and with high technology.  Mobile Health chief executive Mark Eager says they are assessing cutting-edge new technologies with portable and modular healthcare facilities to help district health boards cope when they are under pressure and to assist in smaller towns and rural areas. “We are making substantial bright new changes next year but also continuing with our mobile surgical bus all over New Zealand,” Eager says. “We will be introducing an online interactive learning system and we will also be helping a nationwide stocktake of telehealth and all the facilities for the benefit of all Kiwis. “We are probably the only mobile surgical bus in the world. There are others that are on the road for months at a time. There is one container truck that looks like a food delivery truck in Ecuador which works for a few months a year. “But ours it unique in the way that we operate. It is an amazing concept and a great way of sharing an expensive resource. What we do saves $2 million a year in each town on capital costs, if they had to build a similar facility from scratch. “The bus is getting a new look over Christmas. So, we are excited for Kiwis who need the service next year. Mobile Health will also be working with health organisations to bring another Health Hub to Fieldays 2018. “Our annual rural nurses meeting will be staged in May. This is a great opportunity for rural nurses to expand their knowledge and catch up with one another. “This year we had our first education session via video conferencing with nurses on the Chatham Islands. We will continue to look at remote locations to bring to help our rural health development.” New Zealand’s mobile surgical bus marked its 15-year anniversary earlier this year after more than 21,300 operations in 24 towns. The mobile operating theatre marked its first day of surgery at Te Puia Springs, 100km north of Gisborne back on March 8, 2002. An independent health consultants report has found up to 300 patients annually would probably miss out on surgery if was not for the mobile surgical unit, with its state-of-the-art surgical operating theatre. The bus receives $4 million annually from the Ministry of Health. The bus runs on a five-week rotation system around New Zealand, carrying out operations at Kaikohe, Dargaville, Warkworth, Pukekohe, Te Puia, Wairoa, Taumarunui, Waipukurau, Taihape, Hawera, Levin, Dannevirke, Kapiti, Featherston, Takaka, Motueka, Buller, Waikari, Rangiora, Oamaru, Clyde, Queenstown, Balclutha and Gore. “The reason why the bus exists is to deliver care closer to home which is in line with the government policy. It also helps with recruitment and retention of health professionals in rural towns. We provide low risk day surgery in rural communities that don’t have local access to full operating theatres. “Patients are referred by their doctor to their district health board which places them on the surgical bus operating list. The bus delivers surgeries such as general surgery, children’s general anaesthetic dental, gynaecology, colonoscopy and minor orthopaedic operations. “The clinical team is made up of five teams, with a charge nurse, an anaesthetic tech and a driver on a five-week schedule. Each day they’re joined by an anaesthetist, surgeon and four nursing staff from the local town.”

More in this category: « BioNona gains FDA approval for Atopis eczema cream, plans to start online US sales Health Board Instrumentation Procurement and Implementation Venture is Repository for Applied Experience and Example for Departmental Systems to follow »
back to top
Jun 06, 2018

Bridging the gap between human and animal communication