Delays at Ports of Auckland could cause cost increases 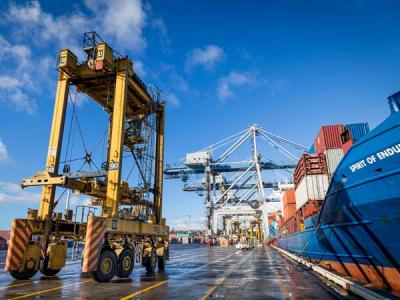 Dec 20, 2017  -  Delays in collecting containers from the Ports of Auckland is costing the road freight transport industry and their customers, and end consumers could ultimately pay the price.  The introduction of automated straddle carriers by the Port has reduced the working area at the container terminal and queue jumping by some trucking companies is creating delays of up to three hours for a truck to pick up a container.

As a result, the road freight transport industry is looking at charging customers for the time trucks sit idle at the Port, waiting to pick up containers.

In the past trucks have usually only had to wait 20 to 30 minutes to pick up a container, but the continued growth in container freight of between five and ten per cent a year is putting more pressure on the Port’s operations.

National Road Carriers CEO David Aitken says the issue has been building for years but recent increases in wait times mean it is reaching the stage where the industry may have to act.

“The time is coming when the industry as a whole may agree to charge for waiting time which will add to costs for end consumers.”

The problem is a complex one, he said, with no easy fix.

While the road transport industry is calling for the Port to be transparent around its booking system and not let some drivers push in when they do not have a slot booked to pick up a container, the solution is not that simple.

“Our industry and customers also have to be more organised and plan ahead at least 24 hours when they ask us to pick-up a container,” said Mike Herrick, the Managing Director of TDL Ltd.

The industry is incurring increased costs with more staff working shifts to pick-up containers at night, as well as the cost of the delays.

Passing costs on to customers when they can no longer be absorbed is becoming a real possibility.

“It’s been happening in Australia for a long time. It has become an acceptable part of the costs of doing business there,” said Top Tranz Ltd Managing Director Marcus de Kort.

“The delays have become the norm,” said Barry Mackenzie, the Managing Director of Philpott Airfreight Ltd. “It’s very frustrating. I know the Port has got to provide a service to the ships and turn them around promptly, but they should also be providing a better service to us.”

“Sometimes the boats are late arriving, but there is no space to store containers,” said. “Yes, there will be a bit more room when the updated automation process has finished, but the freight volume is increasing all the time.”

Mr Mackenzie said there were often queues of trucks, but straddle carriers to load the containers onto them were sitting idle without drivers, compounding the delay problem.

“The space is jammed with containers, often they have to shift three or four to get the one we are picking up.”

The Port operates a booking system, so transport companies can reserve a time to pick-up a nominated container. Only so many slots are available each hour, with some flexibility allowed due to Auckland’s increasing traffic congestion.

“But if the system starts running behind time it can never catch up,” said Mr de Kort. “If a truck sits idle for two to three hours its work schedule for the rest of the day is disrupted and it can’t meet other commitments during the day.”

Larger companies had more resources to juggle against hold-ups at the Port said Mr Herrick, but smaller fleets could often not deploy a different truck to do a job originally scheduled for the one held up at the Port.

“The problem is certainly worse at the moment with the pre-Christmas peak,” said Mr de Kort. But when the Port reduced staff numbers at off peak periods the problem has continued.

With exports expected to reach their annual peak volume early in 2018 the delays at the Port are expected to continue.

“When we moved to night shifts, the problem was solved for a while,” said Mr Herrick. “But now we operate 24/7 five days a week, with shorter hours at the weekend.”

Complicating the process are the different booking systems used by the Port, the Metro Port at Te Papapa and the six-empty container depots around the city where containers are stored in between use.