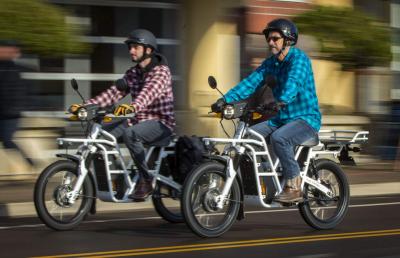 Now, the Ralstons’ firm is sending U.S. dealers the first shipments of Ubcos that can be ridden on streets as well as off road.

The Ubco 2018 2x2 is classified as a moped by the Oregon Department of Motor Vehicles. It has a top speed of 30 miles an hour on a level road.

The motorbikes aren’t suitable for highways, but they are ideal for in-town trips and for off-road use, said Ethan Ralston, the president and chief executive of Ubco Bikes US.

“We are definitely breaking ground for a new type of vehicle in the U.S.,” he said.

With its moped classification in Oregon and other states, people only need a driver’s license to operate the new Ubcos on streets.

The new Ubcos are equipped with brake lights, turn signals, sideview mirrors and other safety features that allow them to be ridden on streets. The 2018 model has a battery that, when fully charged, provides an operating range of 75 miles, 15 miles more than the battery on the 2017 model.

Ubcos are the creation of Ubco Ltd., based in Tauranga, New Zealand. A pair of New Zealand electric bike experts originally had developed the electric vehicles for farm use.

Manufactured in China, the machines are made of X-frame aluminum alloy tubing capable of carrying about 330 pounds, including rider. The motorbikes have electric motors on each wheel, which makes them easier to control than rear-wheel drive motorbikes.

The Ralston’s distribution firm, which they founded last year with the help of local investors, brought the first Ubcos into the U.S. last summer.

Through the end of 2017, the Ralston’s firm had sold 40 of the off-road vehicles to dealers in eight states, Ethan Ralston said.

“We probably sold more than any other dealer because we were filling orders until the (Ubco US) dealer network was established,” he said. “We had them go to Hawaii, Wyoming, Tennessee, Mississippi, Texas and Florida.”

One Oregon woman, who was “in the process of downsizing” bought an off-road Ubco, he said.

“I have about 40 people who say that they want to buy one, but there’s no purchase order yet,” he said.

Ubcos should appeal to people who want a light, two-wheeled electric vehicle that is easy to maneuver and store, Russell said.

“Its physical weight is less than 150 pounds, so that means managing the vehicles for most individuals is not an unwieldy task. It’s small enough that it can fit through a door in a home or an apartment” for storage.

Compared to last year’s model, the new Ubco has a more comfortable seat, a sturdier front fork, and tires designed for both pavement and off-road use, Ralston said. New flanges that dissipate heat from the wheel-mounted electric motors allow more power on uphill climbs, he said.

UBCO also introduced a user app for IOS and Android smartphones that connects to the bike’s computer through Bluetooth. The connection enables riders to update the vehicle’s firmware, diagnose problems, and choose between different driving modes, including on- and off-road riding, and low-torque learner mode.

The mopeds can be equipped with accessories, such as front and rear cargo racks, and panniers for carrying items.

Ethan Ralston and Bob Ralston, compliance officer and managing member of Ubco Bikes US, spent much of last year working to get federal regulatory approval to allow the motorbikes to be driven on public roads.

The Ralstons had to familiarize themselves with U.S. Customs regulations and myriad vehicle requirements from different government agencies, including the federal National Highway Transportation Safety Administration and the U.S. Department of Transportation, before Ubco vehicles could be ridden on roads. In addition, each state has its own regulations for vehicle titling and registration.

Ubcos are packed in metal containers and shipped from China to the Port of Seattle. The Ubco-filled containers are then carried by truck to Ubco’s warehouse in central Eugene.

Ubco Bikes US has four employees: the Ralstons, Kevin Rickerson, distribution and service manager who runs the Eugene warehouse, and a California-based sales manager.

Ubco Bikes US received its first shipment of the street-legal models in December.

In the Eugene warehouse, Ethan Ralston and Rickerson remove the vehicles from the shipping crates and attach handlebars, foot pegs, turn signals and other features. After being fully assembled, the mopeds are shipped to dealers.

So far, 22 of the new vehicles have been sent to dealers in Oregon and four others states, Ralston said.

Because Ubcos are suitable for on- and off-road use, they also could be used as rentals, he said.

The vehicle’s potential as a rental “opens up a market opportunity,” for Ubco Bikes US, Ralston said. The mopeds are “rugged and can take a beating from a rental customer,” he said.

Follow Ed Russo on Twitter @edwardrusso . Email This email address is being protected from spambots. You need JavaScript enabled to view it.