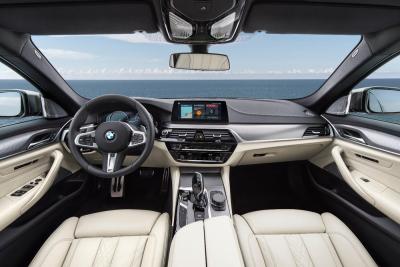 nside, the 5 Series has a well-designed cabin, with a bulkier dashboard design to accommodate the numerous technology options available in the sedan (Credit: BMW USA)

There are a few things that BMW is very good at, and one of those is providing plenty of get-go in a beautiful package. The new-generation 5 Series is a great sedan to start with, but add in the goodness of a twin-turbo V8 and there's even more to love about this beautiful sedan.

The new-generation BMW 5 Series debuted last year and we took turns driving several models, including the excellent 530i and the hybrid 530e, plus we tried out the technologically-advanced self-driving options for the 5. Now, we're looking at the top of the performance heap with the 2018 BMW M550i, with its throaty eight-cylinder and sport-tuned chassis.

The 2018 5 Series carries the sloop-style design of preceding generations of the midsize sedan, with a long hood and a small deck in a forward-heavy three-section build. That long hood promises a lot going on underneath and with the M550i, that promise is fulfilled. The big 4.4-liter eight-cylinder engine outputs 456 horsepower (340 kW) and real-world 0-60 mph (0-92 km/h) times of under five seconds. The M550i's eight-speed automatic is quick on the draw and usually very smooth about it. All-wheel drive (aka "xDrive") is standard in the M550i.

Driving the 2018 BMW M550i is joyful, making everyday "here to there" tasks fun. Whether luxuriously cruising through the neighborhood behind the quiet rumble of the big engine or punching it to growl through the intersection, the big BMW brings it. The Environmental Protection Agency may not like that big growler under the hood, but it's hard to get too snooty over 25 mpg (9.4 l/100km) on the highway.

Inside, the 5 Series has a well-designed cabin, with a bulkier dashboard design to accommodate the numerous technology options available in the sedan. The dash is lower and wider, but keeps things from feeling too cozy. Plenty of legroom and knee room is available for the driver and front passenger. BMW still holds onto the minimalist ideal it's always had for interior design, but the influx of tech and the accompanying controls and buttons are beginning to wear away at that focus.

BMW's designers work to make up for this by adding more digital outputs and by spreading controls out so that those which aren't often used (driver's aids and the like) are not crowding the cluster and center stack. Most of the infotainment controls are through the usual command knob (iDrive) located just down and to the right of the pistol-grip gear shift. The top of this wide, round knob is a touchpad for ease of input under certain situations.

Most of the technology in the M550i that is centered on infotainment is found in the large screen at the center of the dashboard. With the advent of BMW's in-car cameras which detect motion, among other things, control can be through hand gestures rather than just inputs using the knob. The cameras can also usually detect who's doing the input (driver or front passenger) and open locked screens for the passenger that would otherwise be inaccessible to the driver while the vehicle is in motion. This is a smart touch and one we greatly appreciated in the 5 Series.Inside, the 5 Series has a well-designed cabin, with a bulkier dashboard design to accommodate the...

Driver's aids include assisted parking with the vehicle steering itself into parallel or perpendicular parking spaces, and remote parking, which is even cooler. With remote park, the vehicle can be controlled from nearby (basically within Bluetooth range) by a special BMW Display Key. This allows the car to be parked in very tight spaces without the driver having to Nascar out the window when done. See the video here.

For those wondering about daily commuting, hauling around the kids, or otherwise utilizing the 2018 BMW M550i in the way most midsize sedans are meant to be used ... well, it's good for it. Daily drives are thoroughly enjoyable, but if more than two kiddos are planned for that back seat, prepare for some Jenga-inspired yoga to make those seatbelts work – most especially so if booster seats or child safety seats are involved.

Trunk space is excellent, at 18.4 cubic feet (521 liters) in most models. That's only a few tenths shy of what's in the base model 530i, at 18.7 cubes. The standard split-fold rear seats and ski passthrough are great versatility boosters for the 5.

The M550i is not a street bruiser in the American sense, it is what Europeans would more properly declare a "touring sedan." On the run, the 2018 BMW M550i will give any muscle car a run for its money, but once the curves come, the German driver's brand becomes a force. The M550i brings the best of almost everything.

More in this category: « British billionaire ‘planning automotive revival’ at Holden site Your Next Car Might Be A Subscription »
back to top
Jun 05, 2018