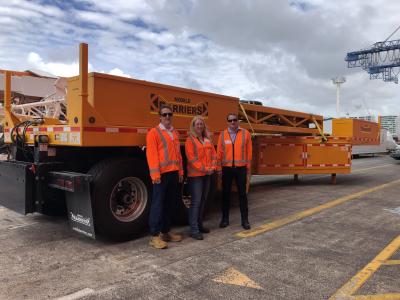 Auckland motorists will soon be sharing the motorway with a new road maintenance vehicle that’s expected to improve safety, efficiency and traffic flows.  The MBT-1, a 20 metre long mobile motorway barrier, rolled off a container ship in Auckland today.

The barrier will provide a highly mobile, protected work environment for motorway workers and is the first of its kind in the Southern Hemisphere. It drives fully setup, like a semi-truck, and can be easily positioned and driven from one site to another. Once it’s in position, crew can quickly move inside the barrier and get to work.“The safest way to carry out essential maintenance is usually to shut down an entire section of motorway, no matter how many lanes there are. The MBT will allow crews to quickly get to work in a safe and protected manner while still keeping some lanes open to traffic, says the Transport Agency’s System Manager Steve Mutton.“It’s a win-win situation for safety and traffic flow.”The MBT-1 will be used by the Auckland Motorway Alliance (AMA) which is responsible for the maintenance and operation of Auckland’s motorways.The AMA makes dozens of night time closures a week to carry out essential safety and maintenance work on stretches of motorway and on and off ramps. The closures are mostly at night when traffic is light and closures cause least disruption and delays. The MTB will give the crews new protection, flexibility and agility.The MBT-1 is widely used on American motorways, where road crews had found that set up and breakdown of a work site often took longer than the work itself. With the mobile barrier, crews are doing in one night what used to take three to five nights.The MBT -1 has side walls nearly 2 metres high.“There’s physical and visual separation from passing traffic. “Rubberneckers” will be less inclined to slow down and look because the barrier’s solid wall means they can’t really see anything. Traffic will be able to flow freely past in their own lanes,” says Mr Mutton.The MBT -1 will be self-contained, carrying its own power, lights and signage. The barrier’s on-board and internal storage can carry tonnes of equipment and supplies. That will help reduce the number of other work vehicles parking on the motorway while work is carried out.“The barrier will be particularly useful on jobs such as chip seal, pothole repairs, median barrier replacements or repairs and where there are a number of discrete work areas and separate locations in a given day or night,” says Mr Mutton.| A Transport New Zealand release   ||  March 29, 2018   |||

More in this category: « Roadmap to harness $1.5 billion transport tech sector Massive savings for Kiwi car buyers under new Toyota plan »
back to top
May 11, 2018