The lights are on at Runway Number One - Istanbul's new airport 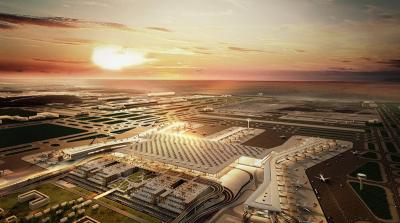 The first runway at Istanbul New Airport (INA) is now ready for takeoff and landing. For the first time, runway number one, which is 3,750m long and 60m wide, has been lit up. INA has installed the world’s biggest and most sophisticated Airfield Ground Lighting (AGL) at its first runway, featuring 34,183 LED lights.

Intelligent lighting makes the visual guiding process easier and improves situational surveillance and aircraft tracking systems. This allows for optimised aircraft routing to and from the gates, a more efficient traffic flow and an increase in safety.

80% of the initial phase of Istanbul New Airport, which is due to open on October 29, is now complete. “We are working day and night for this project that will put Turkey’s stamp on the history of aviation,” says Yusuf Akçayoğlu, CEO of İGA Airports Construction. “We have recently finished the baggage system which constitutes our airport’s core. And now we have made the runway number one ready for landing with all the required equipment and in compliance with the relevant global standards. We are looking forward to delivering Istanbul New Airport in its entirety in October.”

Istanbul New Airport is set to serve an approximate 100 airlines and become the world’s new aviation hub with 350 destinations in passenger and cargo transportation. The initial phase with a passenger capacity of 90 million will be commissioned with three independent parallel runways, taxiways, a terminal building, an air traffic control tower, communication and weather systems as well as other utility buildings.

More in this category: « Why Airlines Almost Always Serve Breakfast on Long-Haul Overnight Flights The Hussaini Hanging Bridge »
back to top
Apr 19, 2018