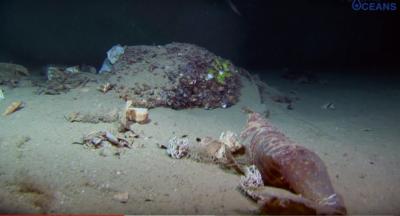 The Plastic Oceans Foundation has published a series of videos explaining how plastic waste gets into the oceans, breaks down into microplastics and enters the food chains.

Prepared by Ben Messenger in Waste Management World.   In the first film, which can be viewed below, we are told that the notion of an actual island of garbage floating in the ocean is a myth. Instead, what exists is more of a plastic smog.

Plastic waste eventually makes it way from rivers and coastlines to the five churning gyres in our oceans. Over time, larger pieces of plastic are broken down by the sun's ultra-violet light, waves, and salt.

This results in tiny pieces being created, which are referred to as microplastics.

Waterborne chemicals from industry and agriculture stick to microplastics, making them tiny toxic pills - which are easily consumed by marine life, where the toxins are absorbed into tissue ... and eventually make their way into the human food chain . . .

More in this category: « Fonterra manufacturing site to reduce water use by 70% The Polish company that is revolutionising solar panel production »
back to top
Sep 04, 2018