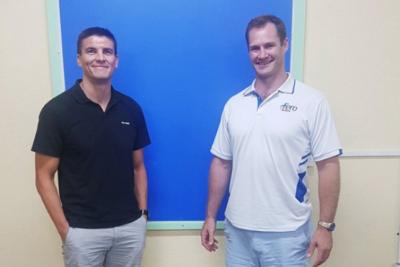 The wire harness producers, based in Vaitele, are now manufacturing ute-lids for the New Zealand company, Pro-Form.  The company specialises in automotive accessories which are delivered to automotive companies throughout the world.

General Manager for Fero Samoa, Sam Fulton told the Sunday Samoan that their Samoa branch has been on track and they have been able to increase their staff to 75 since they began in November last year.

“We’re bringing on a lot of new business at the moment. We’re picking up lots of different things which are what we planned to do. Having a facility here means that all sorts for opportunities are coming up,” he said.

“We’re getting shipments out to sea freight. We have been spending a lot on airfreight getting things backwards and forwards quickly, but now we’re getting more into a routine so we are now sending it out on sea freight and getting some big volumes going.”

Mr. Fulton said his staff members have received additional skills training to meet the requirements of their new customer.

“We’ve currently got guys from New Zealand out here who are teaching our team how to do automotive painting,” he said.

“They are just raving about how enthusiastic the team is and how they want to get into it and learn. We’ve got a great team and everyone is showing that Samoan employees are good to have.”

The General Manager for Pro-Form, Philip Butler, was in Samoa for a brief visit to see the facilities and the progress of their order.

Mr. Butler spoke with the Sunday Samoa about why they chose Fero to manufacturer their design.

“Innovation is a massive thing for Pro-form, it’s high on our agenda so that’s why we ended up with Fero, we designed a new way to do a lid,” said Mr. Butler.

“We removed a lot of known issues in the current market and it gave a lot of added functionality. Fero partnered with us very well and it was a very good fit because they had all the electrical knowledge and we had all the mechanical and automotive knowledge.”

Mr. Butler said he was confident their design would be executed in a world-class facility with highly skilled technicians.

“I’ve been to a lot of places and the hard part is getting the culture right. A lot of times there is a good process but the culture might not be right. Here it’s a blank canvas for Fero, but the foundation was there, the culture of lean quality was already a mindset, so all you’ve got to do is add your processes to that. You can see that in its early stages.”

Mr. Fulton said acquiring customers such as Pro-Form is in line with their vision to diversify their business in Samoa and become a one stop shop, which will attract more business from overseas.

“Once we’re established, we’d like to be ambassadors to manufacturing in Samoa and bring other New Zealand and potentially Australian businesses and introduce them to the benefits of working up here,” said Mr. Fulton.

“The first step with that is to bring some of our customers up here and show them what we are going to be doing.”

“Also what Phil’s business allows us to do is to diversify a bit too because it’s not just wire looms that we are doing, it’s the whole finished product. From start to finish we’re not just adding a part to it, we’re making the whole thing.”

More in this category: « Allbirds shoe company branches out from wool to trees Australasian manufacturing is going to be great again »
back to top
Mar 29, 2018