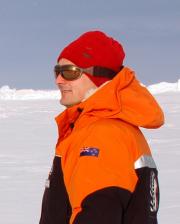 In early 2019, University of Canterbury researchers will be part of an international effort to explore one of the coldest, harshest and most remote locations in the world: the Weddell Sea off Antarctica.

In January and February 2019, a major, 45-day, international scientific expedition – the Weddell Sea Expedition 2019 – aims to survey sea ice, the underside of the Larsen C Ice Shelf, document the rich and little-studied marine life of the western Weddell Sea ecosystem, and locate the wreck of Sir Ernest Shackleton’s ship ‘Endurance’, which was trapped and crushed by the ice and sank there in 1915.

An international team of researchers from the University of Canterbury (UC), the University of Cambridge, the Nekton Foundation, and two South African universities – including glaciologists, marine geologists, marine biologists, oceanographers and marine archaeologists – will use autonomous underwater vehicles (AUVs) to survey the sea floor down to beyond 3,000 metres, study cavities on the underside of the ice shelf, and search for the wreck of the ‘Endurance’.

UC Glaciologist and Remote Sensing expert, Associate Professor Wolfgang Rack of Gateway Antarctica, UC’s Centre for Antarctic Studies and Research, will be a vital part of the expedition.

“The international science community noticed our know-how, and that’s why we were invited to participate in this icebreaker cruise. It is great recognition for New Zealand’s scientific achievements and ability.”

Co-ordinating with the underwater research and survey work, Professor Rack and his UC Gateway Antarctica team, will use specially equipped aerial drones to measure sea ice thickness and snow depth, and will also assist with the navigation of the ‘S.A. Agulhas II’ through the pack ice in the Weddell Sea. The drone measurements will be coordinated with data from an upward-looking AUV to give a better understanding of the sea ice. The UC drones will be operated by a pilot from UC’s Spatial Engineering Research Centre.

“As part of the Deep South National Science Challenge, the Spatial Engineering Research Centre at UC developed a drone radar prototype with Lincoln Agritech which allows us to measure snow on sea ice. This is key to estimating ice thickness using satellites, which is what we are going to test during this scientific expedition,” Professor Rack says.

Antarctica has about 1.5 million square kilometres of floating ice shelves, which have been surveyed and studied from above, but only very rarely from beneath. Many of these ice shelves are thinning and retreating rapidly, possibly impacting sea ice, and making scientific investigations here very timely. The Larsen A and B ice shelves collapsed suddenly in a matter of days in 1995 and 2002, respectively, and one of the biggest iceberg calving events ever recorded took place from Larsen C Ice Shelf in July 2017. Sea ice extent in this area seems to be stable, seemingly a climate paradox which is going to be investigated during this voyage.

The Weddell Sea has been nominated as a large, international Marine Protected Area, so the expedition will gather vital baseline data on the rare and little-studied species which inhabit this icy ecosystem, as well as studying the key physical processes driving changes in the region’s sea ice, ocean currents and the fringing ice shelves.

Funded by a charitable trust in the Netherlands, The Flotilla Foundation, the Weddell Sea Expedition 2019 has a pioneering programme of science and exploration planned, led by Professor Julian Dowdeswell, Director of the Scott Polar Research Institute at Cambridge University, who visited UC earlier this year as a Cambridge Visiting Fellow.

“This expedition will give us an unprecedented opportunity to investigate and explore the complex interplay between ice shelves, sea ice, and ocean in one of the most remote, and least studied places on our planet,” Professor Rack says.

The Weddell Sea Expedition 2019 aims to inspire young people about science, engineering and technology, and the protection of Antarctica, and is partnering with the Royal Geographical Society to ensure that the expedition’s research and findings are disseminated as widely as possible to schools and students around the world.

Gateway Antarctica is the Centre for Antarctic Studies and Research at the University of Canterbury. The centre plays a leading role in national and international Antarctic research projects. This includes areas such as engineering in extreme environments, Antarctica's role in climate change, connections between Antarctica and New Zealand and human influences in and on Antarctica. More information at: http://www.canterbury.ac.nz/science/schools-and-departments/antarctica/

A University of Canterbury releaseMay 14, 2018

More in this category: « A Tribute To Our Heros
back to top