Bridging the gap between human and animal communication 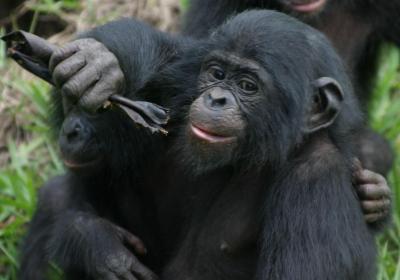 Cooperative turn-taking has been suggested as an ancient mechanism of the language system bridging the existing gap between the articulate human species and our inarticulate primate cousins. A team of... view more Credit: Simone Pika

Language -- one of the most distinctive human traits -- remains a 'mystery' or even a 'problem' for evolutionary theory. It is underpinned by cooperative turn-taking, which consists of reciprocal exchanges of alternating, short and flexible turns between two or more interactants. Turn-taking is used universally across languages and cultures, and shows some signs of phylogenetic parallels in all clades of the primate lineage. Hence, turn-taking has been suggested as an ancient mechanism of the language system bridging the existing gap between the articulate human species and our inarticulate primate cousins. But what exactly do we know about turn-taking in nonhuman primates and other animal taxa?

The researchers reviewed the existing literature by focusing on turn-taking phenomena in birds, mammals, insects and anurans. Simone Pika from the Department of Primatology at the Max Planck Institute of Evolutionary Anthropology, one of the initiators and first author of the study. concludes: "Direct comparisons of turn-taking skills of nonhuman animals in relation to language origins are highly constrained by lack of data, the application of different terms, methodological designs, and study environments".

In addition, research studies have been biased toward birds and vocal interactions and mainly concerned a single key element of full-blown human turn-taking only, the time window. The time-window refers to the gap between an initiating turn and the response turn. It varies in human spoken conversation from 0-500 milliseconds and across nonhuman animal taxa from <50 milliseconds (e.g. songs of plain-tailed wrens) to 5,000 milliseconds (e.g. phee-call exchanges of common marmosets). Research studies on other turn-taking systems --for example gestural interactions of bonobos and chimpanzees -- are currently relatively rare, but „represent, due to the application of key elements characterizing human full-blown turn-taking, the most promising avenue to tackle the question whether turn-taking played a key role in language evolution", says Simone Pika.

The researchers propose a new framework, which aims to enable comparative research by focusing on four key elements characterizing human conversations: A) Flexibility of turn-taking organization. B) Who is taking the next turn? C) When do response turns occur? D) What should the next turn do? The researchers suggest to apply this new comparative framework to carefully chosen representatives of the more than 50 genera of primates and to characterize the existing turn-taking phenotypes. They also emphasize to pay more attention to related phenomena due to convergent evolution.

For instance, recent studies on language competence and cognitive skills of parrots and corvids have put into question the assumed simple inverse correlation between language-readiness and genetic distance from humans. This new field of comparative turn-taking will thus shed light on one of the 'hardest' problems in science by testing whether turn-taking had profound downstream effects on human culture and cooperation, and laid the foundation for the evolution of language.

Published in OBSERVATIONS
Tagged under