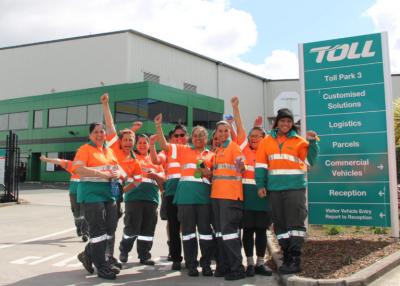 Pay equity has arrived at Toll Logistics, without government or legal intervention, thanks to a new Collective Agreement ratified this week.

The signing of a new Global Framework Agreement facilitated by the International Transport Workers’ Federation (ITF) and logistics giant Toll paved the way for the new Collective Agreement with FIRST Union.

The new agreement sees the consolidation of existing collective agreements with Toll Logistics and Toll Customised Solutions to one agreement that covers the entire North Island and addresses longstanding issues such as pay equity and the use of contract labour-hire.

The Customised Solutions workers were predominately women, while the higher paid Toll Logistics workers were predominately male. Workers from Customised Solutions, making up about two thirds of the staff affected by the new agreement, were historically paid $2 – $3 per hour less than workers from Toll Logistics. The new agreement brings all workers into line with wage rates ranging from the Living Wage (of $20.55) up to $24.50 with the members from Customised Solutions receiving an average increase in the first year of over 10%, or over $80 a week.

The agreement also includes the conversion of labour-hire workers to permanent direct employment after six months engagement on the site (including reasonable allowances for leave). In the past some workers had been employed through third parties for several years.

FIRST Union Transport, Logistics and Manufacturing Secretary, Jared Abbott, says the Global Framework Agreement between Toll and ITF affiliated unions (including FIRST Union) provided the guidance for the parties to achieve the settlement.

“The Framework Agreement provides commitments by the parties to address pay equity issues (where workers are paid differently because of their gender), the treatment of labour-hire workers and the promotion of collective bargaining. We are so pleased that our members and other workers will benefit from these principles being applied in practise.”

In April the managing director of Toll, Michael Byrne said the company was delighted to be taking the lead on improving standards for transport and logistics workers.

“Our agreement with the ITF reflects Toll’s broader commitment to creating a strong and viable logistics industry that fosters a safe and rewarding work environment for all. With this charter, Toll and the ITF are setting clear standards to our approach for safety, labour relations and growth in our industry. I am proud that Toll is leading the way and I look forward to working cooperatively with the ITF to shape these future standards.”