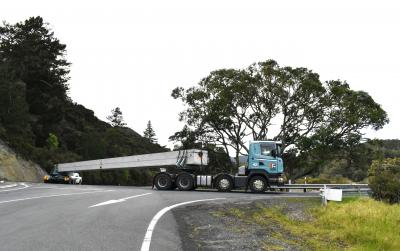 The transporter carrying one of the 30m beams. The rear unit is remote controlled by a second driver to get the beams around tight corners

Four of the 30 concrete beams for Bridge No.2 across the Matakohe River have been delivered this week, with the transporter making daily trips from Ranui in west Auckland to the construction site.

The journey of just over 140 kms usually takes about 2 hours by car but the transporter takes three and a half hours negotiating the route up State Highway 1 and along SH12 to Matakohe. The transporter uses a remote-controlled rear unit, called a jinker, to manoeuvre the 30m beams around tight corners.The transporter leaves Fulton Hogan’s fabrication site in Ranui in the early morning to beat Auckland’s peak traffic and arrives at Matakohe between 6am and Midday depending on traffic along the route.Next week there will be one beam a day delivered Monday to Friday. After Labour Weekend, there will be two deliveries a day Monday to Saturday.“We know these deliveries are generating a lot of interest along the route. Unfortunately we can’t give definite arrival times or guarantee there will be a delivery every day,” says the NZ Transport Agency Senior Manager Project Delivery Chris Hunt.“If you want to come out and see the transporter, please find a safe place that doesn’t involve parking vehicles and standing on the road shoulder where the transporter will come past. And keep a close eye on children so they don’t wander off. There are good safe viewing spots as the transporter passes through Paparoa and Maungaturoto on SH12,” says Mr Hunt.“The team appreciates the local interest in the project and the consideration from motorists during this work, which so far has been performed without incident.”Once the transporter arrives, the beams are delivered through the site entrance on the east side of the Matakohe River. The transporter reverses down the haul road to the bridge site, where a large crane lifts the beams into place.“Please expect short delays in the vicinity of Hardies Bridge while the transporter reverses off the State Highway under traffic management by the site traffic crew and pilot vehicles,” says Mr Hunt. Lifting the bridge beams into place is a significant milestone in the project to build two new two-lane bridges on SH12 near Matakohe. The new 3km alignment will remove the tight curves and short straights and will improve safety on this section of SH12. The project is scheduled for completion in the middle of next year.

More in this category: « Secret plans for new, ‘free’ waterfront stadium XLam is taking on the Australian construction industry »
back to top