Getting the steel from Napier to Queenstown 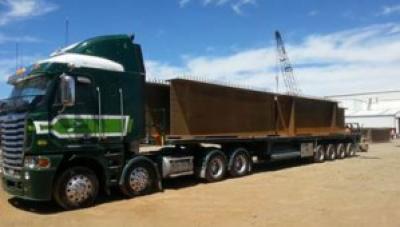 The girders, weighing in at more than 22 tonnes, were fabricated  in Napier by Eastbridge  , a firm which specialise in bridge steel fabrication.

“The original plan was to transport the girders by rail but the 14 November, 2016 earthquake left the main rail trunk line impassable between Kaikoura and Blenheim,” says Phil Dowsett.

“The McConnell Dowell team needed to find another way to get the steel girders to Queenstown efficiently, to ensure the project stayed on track. They looked at sea freighting for part of the journey, but the length of the girders and bracing made this uneconomical. Trucking became the preferred option.”

To minimise the risk of delays, McConnell Dowell constructed a new laydown area not far from site. This enables the project to receive the girders in plenty of time.

Trucking proved to be the best way to get the steel on site quickly. In all, 40 truckloads of steel girders will make the four-day trip between Napier and Queenstown.

A total of 880 tonnes of steel, in lengths of 16 and six metres, will be used in the bridge construction. The longest beam is 16 metres long - ie one-and-a-half times longer than a telephone pole, or eight king size beds laid end on end.