Who was the First Engineer?

Raise ye the stone or cleave the wood to make a path more fair or flat;

Lo, it is black already with blood some Son of Martha spilled for that!

Not as a ladder from earth to Heaven, not as a witness to any creed,

But simple service simply given to his own kind in their common need.

-From Rudyard Kipling’s The Sons of Martha, 1907

For as long as humans have been around, we’ve had an obsession with being first. Hillary and Norgay are immortalized as the first to conquer Everest. Neil Armstrong will forever be remembered as the first to walk on the moon. And any internet comment section will demonstrate the compulsion to claim this same singular achievement: First!

Naturally, we can’t help but wonder who it was that pioneered our profession.

Who was the first engineer? Let’s review some of the candidates. 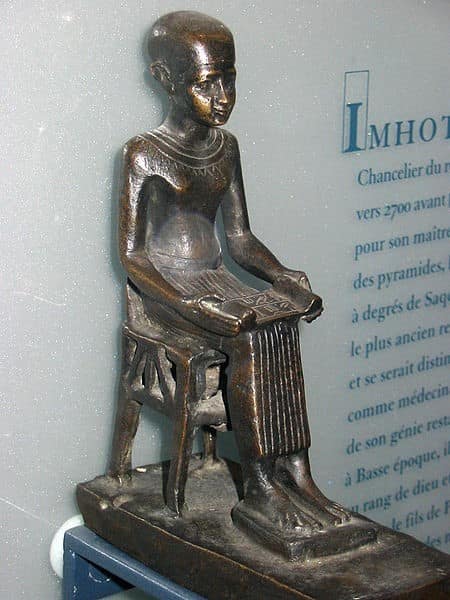 A statuette of Imhotep on display in the Louvre. (Photo courtesy of Hu Totya.)

The Pyramid of Djoser is a step pyramid, consisting of six mastabas (sloping rectangular prisms) layered one on top of another, in contrast to the smooth face of the more familiar Great Pyramid of Giza. The limestone-based step pyramid reaches 62 meters (203 feet) high, with a base measuring approximately 109 by 125 meters (358 by 410 feet).

More in this category: « World's Biggest Engineering Firm Plans to Spend Billions to Become Biggest in Infrastructure Global engineering and advisory firm recruiting 30 graduates in NZ »
back to top