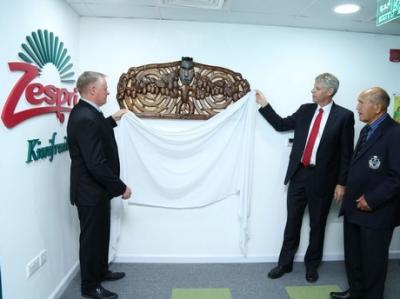 Zespri officially opened its Middle East office in Dubai earlier this week to manage its growing sales and marketing programmes in this region and other developing markets.

Zespri Chief Executive Lain Jager said at the event that Zespri was growing its presence across the Middle East, India and Africa and the new office would support this growth.

“More consumers in the UAE and these regions are enjoying the great taste of premium quality, healthy Zespri Kiwifruit, with sales set to increase by more than 50 percent over the next five years to over 4 million trays of New Zealand fruit and over 2 million trays of global supply (Northern Hemisphere) fruit.

“Zespri’s gold variety SunGold has proved particularly popular with consumers in the Middle East who enjoy its sweet, juicy taste and powerful health properties. Our team in-market is working hard to expand distribution across the region to introduce more consumers to our premium quality fruit and get more of them to buy Zespri Kiwifruit each week,” says Mr Jager.

Zespri’s aim is to grow overall kiwifruit consumption around the world and increase kiwifruit’s share of the global fruitbowl from a fraction of a percent, and building new markets like the Middle East, India and the United States is a key part of this.

A Maori cultural delegation led by kaumatua Kihi Ngatai officially opened and blessed the new office, installing a traditional Maori whakairo (carving) in the office. The carving is named Te Hau Marama which translates to the Wind of Understanding and embraces traditional architecture of the region which takes advantage of desert winds to keep a comfortable breeze for its inhabitants. The carving is made of kauri, traditionally used for pare (lintels) over doorways in wharenui (tribal meeting houses) in New Zealand which provided a boundary between the physical world outside and the spiritual world inside the wharenui.

It is made by James Tapiata who has made several other carvings for Zespri offices in New Zealand and around the world.

More in this category: « FTA boosting exports to Korea Could Brexit Boost Olive Oil Exporters? »
back to top