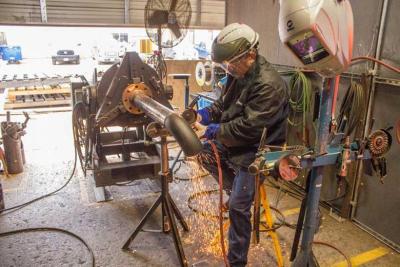 An article preparred by Dan Hermandez  and published earlier this month in The Fabricator.

No matter the welding process being used, proper preparation before you get started is key to ensuring quality in the finished weld. Taking the necessary steps to prepare the weld also can reduce the risk of weld failure as well as wasting time and money on rework and consumables.

Joint preparation and cleaning go hand-in-hand. Which happens first depends on the state in which the pipe is received. Some welding operators, especially on outdoor job sites, may be responsible for cutting the pipe and beveling edges. But in some applications, often performed in pipe shops, the cutting and beveling are handled by someone else before the welder receives the pipe.

Proper joint preparation—and whether it’s beveled, grooved, or notched—is often dictated by the qualified weld procedure, which should ensure access to the joint and proper penetration and weld strength for the application. Once the pipe is cut using an oxyfuel torch, plasma cutter, cutting machine, or other tool, and the bevel is established with a grinder or by machining, be sure to clean the inside and outside of the pipe joint and the bevel.

If the pipe was cut with a machine, it’s likely a lubricant was used, so be sure to remove it during cleaning to reduce the risk of hydrogen inclusions. Cutting with an oxyfuel torch or plasma cutter typically leaves a slag or oxide layer on the cut edge. Be sure to clean this to prevent inclusions and porosity.

Remove any paint, oils, and dirt on the base material before welding; otherwise, these materials could make their way into the weld and cause inclusions or porosity that could harm weld integrity and cause it to fail. Clean the area 1 to 2 inches from the weld joint and the tie-in points, where the lacquer coating on the pipe’s outside surface meets the bevel.

While some welding processes or filler metals are more forgiving to dirt or mill scale on the material, don’t rely on the belief that dirt and oil can be burned off during welding. Any foreign material in the weld can cause problems later.

Proper part fit-up ensures that the joint is set uniformly from start to end, resulting in weld consistency throughout the part. It helps prevent problems with lack of penetration or too much penetration, issues that can decrease the service life of the finished weld.

More in this category: « WSP Global seeks to expand presence Down Under with offer for New Zealand firm Engineering software firm Aveva agrees tie-up with Schneider Electric »
back to top