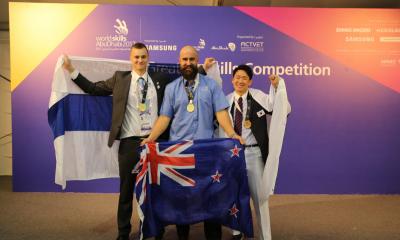 Malcolm Harris, CEO of WorldSkills New Zealand, says, “I am thrilled with the performance of the NZITP Skills Team at the recent WorldSkills International competition held in Abu Dhabi Oct 14-18. The team competed in 13 of 51 Skill categories in the competition attended by over 1300 of the world’s finest young skill apprentices.”

He adds that, “A Gold medal won by Jarrod Wood in the Aircraft Maintenance category sealed a very good team performance with another five competitors winning Medallions of Excellence for top scores.”

Wood, for his part, shares his experience on the Competition:“The competition skill of aircraft maintenance was full of professionals. It is a very good reflection of the people in our trade. Everyday was a challenge. But Mike [Naus, the NZ Skill Expert on aircraft maintenance who coached Wood throughout his training] and I took it day by day and that seemed to work well.”  “I was so humbled to be standing on the stage next to Finland and Korea. Winning gold was such a shock. It still hasn’t sunk in yet. But I feel privileged and proud to be bringing back NZ’s second ever gold medal. I’m also proud to have been awarded Best in Nation.”

Wood, nonetheless, stresses, “But the whole NZ Team deserved that award. They’re such amazing professionals in their respective trades, and can all be proud of their performance.”

The five Medallions of Excellence won by the New Zealand Institutes of Technology and Polytechnics (NZITP) Skills Team were the following:

1,300 young people from 59 WorldSkills Member countries and regions showcased their talent across 51 skillscompetitions, between 15-18 October. This was the first time that the WorldSkills Competition has been held in the Middle East and North Africa region. At the Closing Ceremony at the du Arena in Abu Dhabi - with around 10,000 international visitors and a global audience more than 825,000 online - watched Competitors discover who had won coveted gold, silver, and bronze WorldSkills medals.

In addition to the presentation of medals, the Closing Ceremony provided an opportunity to reflect on the success of WorldSkills Abu Dhabi 2017, the largest WorldSkills Competition to date, which attracted more than 125,000 visitors.

Held in conjunction with the Competition were the WorldSkills Conference 2017 and the first International TVET Youth Forum. These provided a unique opportunity for young professionals, Ministers, and other global policymakers to debate the major issues that the vocational education sector faces.

The Closing Ceremony of WorldSkills Abu Dhabi 2017 ended with the handover of the WorldSkills flag to the next hosts, WorldSkills Kazan 2019. The 45th WorldSkills Competition will be held on 29 August – 3 September 2019 in Kazan, Russia.

The WorldSkills International Competition occurs every two years and is the biggest vocational education and skills excellence event in the world, reflecting global industry practice. Competitors will represent the best of their peers and are selected from skills competitions in 78 WorldSkills Member countries and regions. They demonstrate technical abilities both individually and collectively to execute specific tasks for which they study and/or perform in their workplace. Skills competitions showcase and inspire world-class excellence in skills and introduce the youth to a variety of skilled career options.

One of the main legacies of the WorldSkills Competitions is to give visibility and importance to professional education, as one of the true tools of socioeconomic transformation.

The Competition also provides leaders in industry, government, and education sectors with the opportunity to exchange information and best practices. New ideas and processes inspire school-aged youth to dedicate themselves to technical and technological careers and towards to a better future.

More in this category: « ProMag’s portfolio of trade exhibitions Agritech programme focusing on digital technologies »
back to top