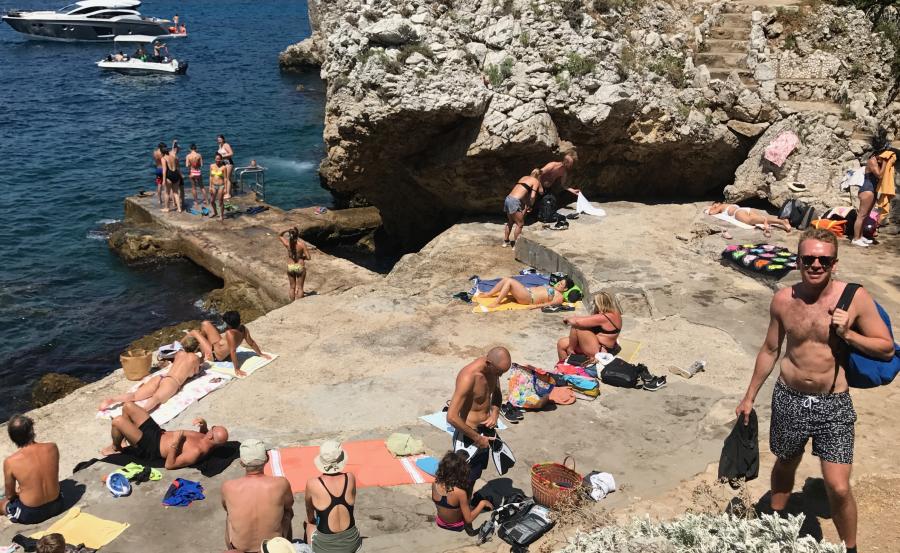 Strollers Discover Tranquility in the Eye of the International Tourist Storm

12 Nov 2017  -  In Antibes it was curious to observe that domestic property prices in the town seemed on a par with those in New Zealand’s rural Hawkes Bay and this unpressured ambience permeates the fabled Cote D’Azur,writes our roaming travel editor, Peter Isaac.  If anyone was in a rush then they made sure to keep it to themselves, certainly in the Antibes town square, just a leisurely 10 minute walk from the railway station, which itself radiated a rural line, off-peak, level of activity.

Plenty of bench space in the square ringed with its murmuring cafes.

Plenty of towel space too on the inner town’s own mellow beaches, the ones you encounter before hitting the more substantial one on its outskirts toward the Cap d’Antibes.

Sauntering along the Cap d’Antibes, along the storied Chemin des Douaniers, with itinerant international New Zealand yachtsman - lawyer Zac Foot, (pictured extreme right, Baie des Milliardaires) and particularly evident was the easy-going nature of the French at leisure, and they did give the appearance of being almost entirely French.

Their behaviour being in contrast to their English-speaking counterparts who would have been determinedly striding out on the well maintained yet unostentatious and litter-free Cap foot path with their alpine sticks, or hoarsely panting by in running rig.

A cooling plunge en route in the sumptuously-named Bay of Billionaires, ringed by narrow jagged beaches and vaguely reminiscent of Cornwall’s smugglers coves, and hence one senses the Douaniers, the customs enforcers, appellation here.

As it turned out our swim was rewarded by slices of home-cooked pizza from local fellow beachgoers sympathetic to this incongruous, pallid Anglo duo.

Past the Chateau de la Croe, pre-war refuge of the abdicated Edward V111, before Winston Churchill instructed he and his duchess to hurry to the Atlantic coast where a battleship captained by Louis Mountbatten, his cousin, would pick them up before the Germans did.

The Chateau incidentally, now under restoration by its new owner, another oligarch, but of a different stripe -- Roman Abramovich, proprietor as well of the Chelsea Football Club.

Now on to the Cap itself, doubling back via Eden Roc.

On the other side now, the westerly one, on the Cannes side, ambling into Juan Les Pins which is back-to-back with Antibes.

In an international resort compression sense, it is a bit like starting a walk through Paris and stumbling across Rome too.

Latin language buffs beware though of the revealing shibboleth which even on this accepting coastline separates the dolts from the sophisticates.

It is “Shoo-arng” Les Pins

If Antibes is redolent of the stately 1930s then Juan Les Pins presents a 1950s resort aspect, just a soupcon of repressed raffishness.

At the isthmus neck of the Cap d’ Antibes we turned east back to Antibes traversing a shallow saddle hump via the Chemin des Sables walking through leafy and seemingly deserted streets reminiscent of the verdancy and understated prosperity of the nicer suburbs one finds lining the Pacific.civic shore.

Once returned to the Antibes side of the Cap and a further supply of not terribly crowded sandy beach capacity, another immersion to dissipate the now restored received effects of the afternoon ambient heat.

France is the world’s most visited country. The Riviera, it’s most coveted destination.

All additional proof that if you truly want to get away from it all, as the English like to say, then the most tranquil place to be is in the eye of the seasonal international tourist storm.

\| the MSCTtravelDesk editor, This email address is being protected from spambots. You need JavaScript enabled to view it.  || Sunday 12 November, 2017   |||

Published in Travel Directions
Tagged under

More in this category: « Winner of the NZ Bay Fisher Magazine Rarotonga
back to top