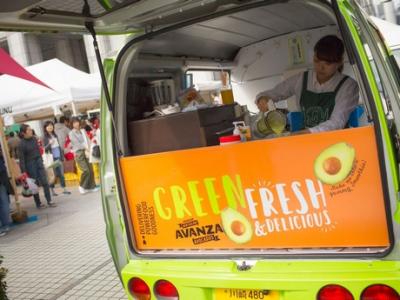 The AVANZA smoothie wagon at the Farmers Market in Japan FreshPlaza

17 Nov 2017  -  Dealing with irregular bearing is a problem the New Zealand avocado industry needs to solve, according to AVOCO the nation's largest marketing company for the fruit. Martin Napper, Export Marketing Executive at Primor Produce, part of the AVOCO venture which owns the AVANZA brand, says at a time when consumption and demand is increasing strongly, the market still provides some inconsistency.

"At the moment it seems that we spend one year building markets and the next apologising for short supply," Mr Napper said. "A very frustrating situation especially when demand is so strong in all of our markets and many other markets AVANZA is yet to enter, such as Taiwan and China. With larger crops expected over time a lot of research is being directed toward this (irregular bearing)."

AVOCO is a joint venture marketing company between Primor Produce Ltd and Southern Produce Ltd. AVANZA is a brand of AVOCO used in markets outside of Australia, which is the major export market at around 80 per cent. It also supplies to Asian markets including Korea (7%), Japan (5%), Singapore (3%), as well as small volumes to Thailand, Malaysia, and India.

Mr Napper says AVOCO volumes are half that of last year, but values are up around 30 per cent. Some reasons behind this is the lower than predicted volume from within Australia has seen the Australian market a lot firmer than expected for this time of the year, with current values usually seen in January and February when Australian volumes are at their lowest. He anticipates prices staying firm with retail prices currently at AU$3.90/piece which challenges consumption.

The Export Marketing Executive adds there are plenty of positives, with higher returns and optimism in the category has seen about 1,000 hectares of new plantings over the past year, meaning there is currently a three year waiting list for trees. In addition, early forecasts are encouraging for a bigger crop in 2018 as well as China market access is close with protocols ready to be signed-off soon. This access could in time open up a big opportunity for New Zealand.

"The country's avocado industry is a very cohesive industry able to adapt quickly to customer export requirements, such as nil detectable chemical MRL’s in Korea and new China protocols," Mr Napper said. "With a quality offering it is well placed to take up future opportunities for growth. Avocado continues to defy gravity with its popularity and social media interest."

AVOCO/AVANZA’s share of New Zealand industry is around 64 per cent, and the company is also reporting that industry export volumes are around half of last year; 2.5million (5.5kg) trays compared with 4.8m last year. But he sees plenty of future opportunity in the medium to long term for expansion in the company's major market, to meet the rapidly growing demand across the Tasman.

"There is still some industry uncertainty as to final crop volume," Mr Napper said. "In Australia we are flowing fruit to fit programmes through to late February. Australian consumption just keeps on increasing and it is predicted that with an increase in per head consumption from 3.5kg to 5kg coupled with increasing population growth they will move from the current 16 million trays to 24 million over the next 8-10 years. With seasonality of supply, a proportion of this demand will need to be supplied from New Zealand."

Korea has also shown rapid growth from 250,000 trays three years ago to 500,000 last year and now fast approaching 1 million trays this year from all origins and at good value, including New Zealand, California and Mexico. Mr Napper says Korea is a good market for AVANZA as it prefers large size fruit, which suits New Zealand’s crop profile.

More in this category: « Food Safety Supercharger lands in Australia Fielding rural investment company, MyFarm is chasing $13 million for the lease and development of four apple orchards in Hawke's Bay. »
back to top