KORU® ramping up volumes in both hemispheres 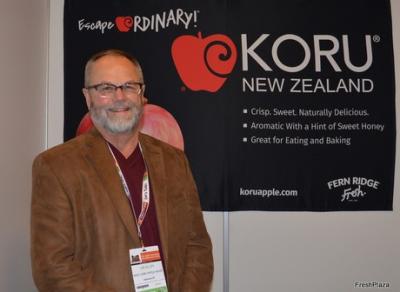 Nov 29, 2017  -  KORU® is a new apple variety which has been grown in New Zealand for a few years now and exported to the US market. Now it is also being grown in the States and the area will increase considerably in years to come writes Nichola Watson for FreshPlaza.

"We import this apple in February and March," explains Jim Allen from New York Apple Sales. "Now we are growing it in the States too. It is an excellent eating apple, a cross between the Braeburn and Fuji apples. The Fuji gives it that high flavour and sugars and the low acid Braeburn combines them together."

Jim was at the Amsterdam Produce Show promoting the KORU® apple as it is also sold in Europe. "We are planting heavily in the US and have already harvested the New York and Washington state crops. We are in a group of three different marketers who have the right to market the apple for a grower's cooperative group who have the right to grow it. This year we harvested between 700 and 800 bins in New York and 1,500 bins in Washington state. Volumes will be increasing threefold each year in the States, just as they are in New Zealand."

The current New Zealand production is around 160,000, by 2020 they are looking at 300,000. It is a good yielding variety and a good sized apple which colours very nicely.

"We have been importing it now for 3-4 years," said Jim. "This is our second year of domestic production and KORU® is in the major retailers such as Walmart, Cosco and others. It is a hard apple which holds up very well and we are very excited about it. We think it is one of the best new apples around."

US production starts in October and runs through to January, then in February and March apples are imported from New Zealand. "What we have done this year is put some of our domestic crop in storage, we expect to bring those out a month before the new season starts. New Zealand stocks will last until August - September making an almost year round supply. This is the first year that we have put a lot in CA storage, but we have a lot of confidence that the quality will still be very good, the characteristics of the apple already point to a great storage apple."

More in this category: « Fielding rural investment company, MyFarm is chasing $13 million for the lease and development of four apple orchards in Hawke's Bay. Clearance programme scores well for New Zealand navels »
back to top