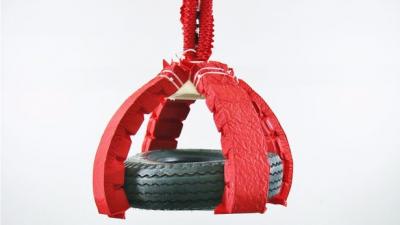 Nov 30, 2017  -  The vacuum-powered soft robots are reported capable of lifting objects a thousand times their own weight.  There have been a number of soft robots inspired by the ancient art of paper folding – origami – recently, including polymer-based microgrippers and the safety-first Twister. Researchers from Harvard and MIT say that robots made of soft materials are often not as strong as their rigid counterparts. This thinking has led to the development of inexpensive artificial muscles that have been designed to give soft robots superpowers.

The artificial muscles have been developed by a team from Wyss Institute at Harvard University and MIT's Computer Science and Artificial Intelligence Laboratory (CSAIL), and use only air or water pressure to assist soft robots in lifting objects up to a thousand times their own weight. And they bend and flex in a less, well, robot-like fashion.

The muscle-like actuator is made up of an inner skeleton, which can be fashioned from a range of materials, including a metal coil or folded plastic, and is surrounded by air or liquid, before being sealed in a plastic or textile outer skin.

Muscle movement is triggered when a vacuum created inside the skin collapses around the skeleton, causing tension in the structure that results in movement. The type of movement is controlled purely by the shape of the skeleton, meaning that system processing and complex control algorithms may be surplus to requirements.

"One of the key aspects of these muscles is that they're programmable, in the sense that designing how the skeleton folds defines how the whole structure moves," explained Shuguang Li, Ph.D, a Postdoctoral Fellow at the Wyss Institute and MIT CSAIL. "You essentially get that motion for free, without the need for a control system."A single vacuum source drives this snake-like soft robot with gripper

The researchers have built a number of different soft robots to demonstrate the numerous capabilities and resilience of their creation. They report that the artificial muscles are both lightweight and very powerful, claiming that one 2.6-gram actuator is capable of lifting a 3-kilogram object.

They're cheap and quick to make too. An actuator can be put together using materials that cost less than a dollar in around 10 minutes. And to demonstrate the scalable nature of the development, the researchers have made artificial muscles as small as a few millimeters in size to a meter, without any dip in performance.

The team also considers its innovation to be safer for close contact assistive robotics than other soft robot systems in development.

"Vacuum-based muscles have a lower risk of rupture, failure, and damage, and they don't expand when they're operating, so you can integrate them into closer-fitting robots on the human body," said co-author of the paper Daniel Vogt, M.S.

Potential usage examples include surgical devices, exoskeletons, deep sea manipulators and even architecture that can change its shape or function when needed and large structures that can be sent into space to aid exploration. A water-soluble version has also been developed, opening the door to potential use for ingestible robots.

"Now that we have created actuators with properties similar to natural muscle, we can imagine building almost any robot for almost any task," said Rob Wood Ph.D, Founding Core Faculty member of the Wyss Institute.

A paper detailing the research has been published in the journal Proceedings of the National Academy of Sciences.

More in this category: « $2m funding to research human & robot coworking Robot Workers: Will Engineering Jobs Be Automated? »
back to top