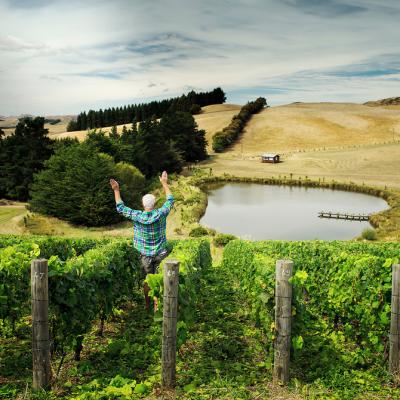 Dec 22, 2017  -  A US billionaire is funnelling tens of millions of dollars into a three-pronged New Zealand fine wine investment, in an ambitious attempt to mirror a business model developed by a French insurance giant writes David Williams for Newsroom.  The hope is to prove to the world that this country isn’t just a high-volume, low-price producer of sauvignon blanc – that it can, in fact, produce some of the best fine wine in the world.

It says the Sheths are also buying Central Otago’s Lowburn Ferry Estates (which requires another OIO application), including 27.5 hectares of land near Cromwell, and four hectares of yet-to-be-planted land in Hawke’s Bay’s Gimblett Gravel winegrowing area, as part of their “ambitious” investment plan.

“Achieving economies of scale is a key part of the investment,” the OIO decision says, while noting the Pyramid Valley purchase isn’t dependent on the other two going ahead.

“The applicant considers there is an opportunity to create a successful competitive business in the New Zealand fine wine industry, replicating a business model used successfully in Europe.”

Sheth’s business partner is Steve Smith, the Kiwi co-founder and developer of Craggy Range wines. Smith explains to Newsroom the idea is to emulate the business model developed by insurance company AXA. According to Forbes magazine, AXA has acquired wine estates in Burgundy, France, and Hungary and Portugal since 1987 and owns more than 500 hectares of vineyards around Europe.

Smith, who got out of Craggy in 2015, says the AXA fine wine entities coalesce under the same business and management umbrella, while retaining their independent brand and personality. It’s extremely successful as a strategy and a business, he says.

“We think we’ve got an opportunity to do that in New Zealand, where you have a bunch of these smaller, really high-end brands that, by themselves, probably struggle to be long-term sustainable businesses because of their lack of scale at a business level – not so much a lack of scale of wine-making.”

“In the context of a true fine wine investment in New Zealand it’s probably the most significant that’s been made, I would suggest.”

That’s great for New Zealand, he says. The danger, in his view, is the country being pigeon-holed as just a producer of sauvignon blanc at really good-value prices.

“That would be an absolute crying shame if that’s where the New Zealand wine industry ended up, because in this country are some of the world’s great wines made from some of the world’s most famous grape varieties. And we believe it’s really important that the world gets to see that.”

Across Aotearoa New Zealand Fine Wine Estates’ three properties, Sheth’s investment is in the tens of millions of dollars, Smith says. “In the context of a true fine wine investment in New Zealand it’s probably the most significant that’s been made, I would suggest.”

The 80.7 hectare Pyramid Valley block is at Waikari, an hour north of Christchurch, close to the Waipara wine area. The vineyard was established by Mike and Claudia Weersing. The catalyst for the sale was the death of Mike’s father, Jim, who, alongside his family trust, were the operation’s major financial backers. The Weersings will initially stay on to manage the vineyard.

The vineyard is fully biodynamic and organic certified. Just over two hectares is already planted in grapes, with almost all the rest of the land used for pasture and water storage.

Pyramid Valley is high-end stuff. On average, 10,000 bottles of pinot noir and chardonnay, which retail for about $120 each, are produced each year. Two-thirds are exported.

(Yes, but how good is it? Smith says he regards the site as one of the best in the world to grow chardonnay. The combination of soils and climate give the wine a unique character, he says. “When you have a great bottle of Pyramid Valley chardonnay, particularly, but also the pinot, it leaves a lasting impression on you. With any high-end luxury product, that’s the name of the game.”)

The OIO decision lays out the breadth – but not the dollar value – of Sheth’s investment.

Two capital investments will be made over the next six years, including $1 million in the first three years. The first stage is to expand the vineyard area – the figures are redacted but to an area less than 10 hectares – thus increasing production. (Lowburn Ferry’s vineyard, near Cromwell, will also be enlarged.) Pyramid Valley’s vineyard development plans include building infrastructure for irrigation and frost protection.

After 2020, high-quality wine-tasting facilities and accommodation will be built on-site – although, the OIO says, “these facilities have not yet been designed, are at an early stage of planning, and do not yet have tangible costings”.

The OIO dismisses as “too vague, remote and unsubstantiated” claims by the Sheths that their Pyramid Valley investment will increase wine tourism to New Zealand, particularly by high-net-worth individuals.

Smith says Aotearoa New Zealand Fine Wine Estates want to take time to design the tourism accommodation, “but I can tell you now that it will definitely happen”. “And, if anything, the level of investment that we talked about in the OIO application is probably conservative.”

So, in a possibly unfair binary choice, is Sheth’s investment a money-making hobby or a serious business endeavour? Smith leans towards the latter. But he admits Sheth’s technical appreciation of wine is more “sit around with his mates” quaffing a good wine, rather than “somebody who loves to hang out with serious wine geeks all the time”.

Sheth is “well-financed”, the OIO notes in an extraordinary understatement. Forbes estimates his net worth to be $US1.39 billion ($NZ2 billion). He is the co-founder and president of US investment company Vista Equity Partners, which manages more than $US14 billion, which is mainly for mergers and acquisitions, primarily in the software and technology sector. He lives in Austin, Texas, and used to work for Bain Capital, Goldman Sachs and Deutsche Morgan Grenfell.

Smith says Sheth loves wine, New Zealand and conservation. Sheth’s Sangreal Foundation and Global Wildlife Conservation entities fund a variety of causes, including a New Zealand Department of Conservation programme to help save the kaki, or black stilt, and school-building in Africa.

Sheth’s likely to shell out for more environmental causes, such as projects associated with the country’s target of being predator-free by 2050, Smith reckons. “As the projects evolve around that and they have some real chance of making a difference, I would expect Brian to be involved at an increasing level.”

Smith says Aotearoa New Zealand Fine Wine Estates, which has brought on former Trinity Hill CEO Michael Henley as its chief executive, has been keeping quiet while it shapes its plans. Snuffling the aroma of the brands, swirling the different distribution channels, pondering the finish of tourism accommodation designs.

“I think that’s going to be a decent amount of work for a while,” Smith says. “There’s been a couple of other smaller wineries that have come to market in the last two or three months that we’ve had a look at and decided ‘no’, because we just want to concentrate on this at the moment. But if it fits what we want to do and it adds value to what we want to do then, of course, we’ll have a look at it.”

The report says Canterbury and Waipara harvested 8240 tonnes of grapes this year. The area boasts 65 wineries, 14 grape growers and employs 440 people. That makes it a minnow compared to its powerhouse northern neighbour, Marlborough, which employs 2400 people and harvested 302,396 tonnes last year.

More in this category: « Winemakers From Down Under Former ATEED CEO joins IoT startup Wine Grenade’s board »
back to top