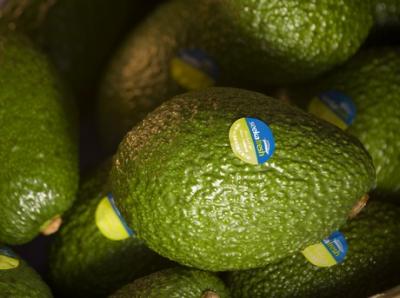 Jan 10, 2018  -  Long before the start of the harvest the New Zealand avocado crop was estimated to be down by approximately 50% due to the bi-annual nature of the trees. The latest estimate has the New Zealand export crop at approximately 2.2m trays down from over 5m in the previous year.

Back in November Michael Franks, CEO of Seeka told FreshPlaza that volumes were, as estimated down by 50%. Now as the harvest draws to a close he reckons that the volumes are down an additional 10-20%. "Crops are delivering less bins than anticipated and colour in the fruit is affecting the export packout rate. The combination has reduced the total volumes. We are in the home straight now and pushing to complete the harvest."

Last week saw New Zealand hit by strong winds and prolonged heavy rain, but according to Franks this will have little effect on the avocado volumes, just a delay in harvesting. The bigger issue is that the weather has disrupted harvest and shipping. Supply lines are thin and processors are now accelerating the packout and airfreighting to key customers to keep the supply lines open.

Growers have avoided the potential devastation that could have been caused by the big storm that hit New Zealand. "Exposed orchards did suffer some damage. There has been some fruit drop in Avocados but noting that harvest is nearing completion, most of the fruit was off. The bad weather may have a slight impact on kiwifruit volumes for the coming season with both fruit drop and proximity marking [damage where fruit rubs together]. It’s a little too early to tell. All in all, the general sentiment is that growers feel they are lucky to have gotten away so lightly.

Last year Seeka bought and syndicated two new avocado orchards in the Northland. There orchards had been previously select picked and have deliver yields in line with estimates. It has also been a smooth transition for the orchards, "They have gone from private ownership to syndicated orchards managed by Seeka, we now have a stable workforce in place at both the Rising Sun and the Rising Star orchards."

This year Seeka entered the Korean market for the first time, but only supplied limited volumes in order to open the market. Franks said they were happy with quality, demand and pricing in Korea.

"In Australia, Seeka has completed the cherry harvest and is now harvesting plums before moving into the Nashi and European pear harvests. The temperatures in Australia are starting to warm up, but all in all we are satisfied with the status of our orchards and development program," states Franks.

Seeka will be attending Fruit Logistica in Berlin in February and will be happy to fix appointments before hand.| A FreshPlaza release written by This email address is being protected from spambots. You need JavaScript enabled to view it.  ||  January 9, 2018   |||

More in this category: « Contaminated spray may cost apple exporters $3m BerryCo says industry expansion is through varietal development »
back to top