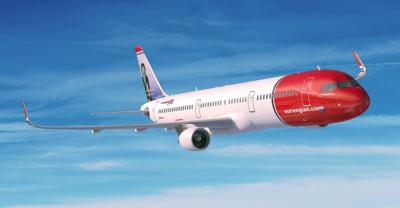 Norwegian Air ordered 30 Airbus A321LRs, updating part of an earlier order for 100 A320neo jets. The low-cost carrier seeks to offer more service between Europe and the Western Hemisphere, and between Scandinavia and Asia.

According to Airbus, the A321LR will have the longest range of any single-aisle commercial jet, suitable for transatlantic and other “long haul” routes that are not currently feasible for single-aisle aircraft.

The new A321neo variant is planned to enter into commercial service during Q4 2018, according to Airbus.

Detailed by the OEM, the A321neo LR, can be configured to accommodate up to 240 passengers. Its 97-metric tons Maximum Take-Off Weight and a third Additional Centre Fuel Tank give the aircraft a range of 4,000 nautical miles (7,400 km).

Airbus also reemphasized the fuel-efficiency claims of the A321neo, attributed to the LEAP 1-A engine, advances in aerodynamics, and other cabin-design changes.

In 2016 Airbus reported that low-cost carrier Norwegian Air Shuttle ASA ordered 30 Airbus A321LRs, updating part of an earlier order for 100 A320neo jets. The 30 long-range aircraft were reported to be set for delivery between 2019 and 2021, as the carrier seeks to offer more service between Europe and the Western Hemisphere, and between Scandinavia and Asia.

“I am very excited about this new order of the Airbus A321LR,” stated Norwegian CEO Bjorn Kjos. “The new ‘short long-haul’ aircraft available from 2019 fits really well with our global expansion plans and future long-haul network, both in terms of size, range and fuel efficiency.”

More in this category: « Utilisation figures on Wellington-Canberra route revealed Address Infrastructure Crisis to Secure Aviation’s Future »
back to top